The Damnation Of Sam Hell 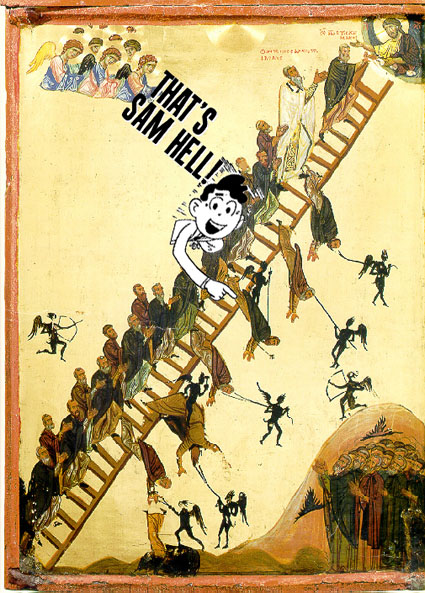 "Go to Hell!" he cried, in a fit of pique, an expression of hostility and ire, when confronted by a friend when he was caught doing something wrong and upbraided. Some people are like that; they could just say sorry -- after all, they're the one in the wrong. Maybe it's pride -- it probably is -- or maybe it has something to do with being surprised, then embarrassed -- it probably does.

Sometimes we think Hell is mythic. Mythic in the sense of something that isn't literally true. But when it comes to Hell, can there be any doubt it's real? I tell myself, We have black holes the size (diameter) of the earth's orbit around the sun, oceans 5,000 miles deep on Uranus, planets that are solid diamond through and through, what's so tough about carving out a little niche for Hell?

Well, Samael Heck, said it, "Go to Hell, and then ... guess what? ... He woke up one night; it seemed like a nightmare but it wasn't, there he was, dangling on a ladder, halfway between Heaven and Hell -- true story. It appears he had died. And he saw the souls of the other dead either going up or being dragged down by demonic creatures. It was one or the other. There was no exception. Until, who knows how it happened, somehow Samael swung back up to the ladder. And he must have been hidden from view by the others on top of the ladder, as he managed to shimmy back down, flip over the top of the ladder, and run. He escaped back to the world, and reentered his body.

So much for the 12th century, for that's when all this stuff happened. A long time ago. Leaving us to contemplate something equally fantastic, that this guy has since lived all these centuries. The whole list would include the 13th, 14th, 15th, 16th, 17th, 18th, 19th (in which he briefly knew John Wilkes Booth), 20th, and now the 21st centuries. Meaning, unless he hurries up and dies, he's going to surpass Methuselah! Another guy who must have flipped the ladder.

Anyway, maybe it was back when he knew Booth, he toughened up his name to Sam Hell, becoming proverbial, like Waldo and Carmen Santiago, with his question being, "What in the Sam Hell?!" My grandpa used to say that all the time, openly, although perhaps ignorantly, invoking someone who was at least familiar with a presidential assassin, not to mention being a rare escapee from the fiery judgment. But what did Grandpa know, and when did he know it? Probably not much, with the date indeterminable.

Because this is going too long, I'm just going to list some facts about Sam Hell, without ordering them or fleshing out any meaning or significance:

Posted by dbkundalini at 6:58 AM