Death Goes To The Dentist With Me 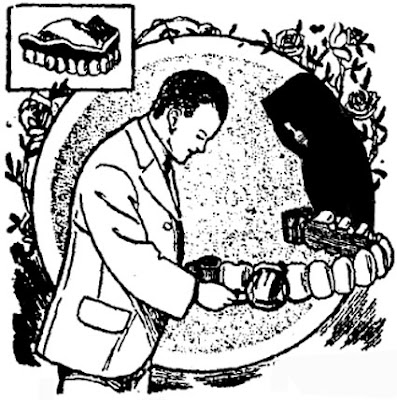 I was wrought up with anxiety today, like I am every time I go to the dentist. So I wasn't exactly happy when my newest friend, Death, showed up at the door. I tried to be nice about it, looking at my watch and saying I was in a hurry. Which had exactly the opposite result I wanted; he invited himself along.

He's been dropping by ever since I let him guest-blog for me one day. Then later we went out drinking, which, with three deaths, is still being investigated. It might get suspicious after a while. Even the police might be able to connect the dots. I'm starting to realize I need to hang out with a better breed of company, but I'm also realizing he's a tough old bastard to shake.

I really noticed that when we got to the dentist. I figured he'd excuse himself and go off on his business. Surely someone's number was up in the area, not to mention the world. But he wasn't in any hurry, and tagged along with me right into the office, a potentially dangerous situation. No one seemed to notice him, and by now all I could see was a very faint black mist.

I muttered under my breath, "Please, no killing, OK? These people work on my teeth, a thankless job all by itself, the last thing they need is to lose their lives over it." I heard a faint chuckle, as if he meant to say, "I'm a big boy, I can take care of myself." To which I also replied with a chuckle, as if I meant to say, "That's what I'm afraid of."

The way it worked out, I really felt like he thought he was protecting me. And a near death experience never hurt anyone, so the damage was definitely limited. In fact, a near death experience can wake you up to appreciate your life more fully. A friend was telling me about a popular book about a preacher's little son who "died" and went to Heaven. But they sent him back, so he could write the book. From which, I understand, he made a lot of money on ... Smart kid, reminds me of myself, except I'm still poor. 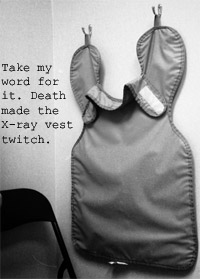 To his credit, Death was on his best behavior ... most of the time. He sat in the corner. Occasionally, I noticed the X-ray vest twitching on its hooks. I was hoping they wouldn't do any X-rays, since the radiation might reveal him in the corner. I don't know the science of X-ray machines very well. My suspicion is they're like the old X-ray glasses we used to get, generally a fraud with a feather in the lens. But if so, the dentist is the world's greatest liar. Because I can barely make out the feather pattern when looking at pictures of my teeth, so it's at least a stunning illusion. I was also afraid Death might even be scared of the X-ray and thereby compelled to kill someone.

I saw him start to react whenever I showed discomfort. The light was bright in my eyes, so the dentist gave me sunglasses. I had to have several casts made of my teeth, which made me gag. You start imagining the sticky thick gunk going down your throat, it's a killer. Forget water-boarding, send Al Qaeda to the dentist! Then there were those inevitable times I needed to scratch my nose, but didn't want to interrupt the doctor. I had to be very careful not to cry out. The last thing I wanted was a dead dentist when he still had work to do. Death can be just that quick.

The good news is no one died ... at the dentist office. The near death experience I mentioned came when I was checking out. First, the checkout lady needed to finish a call with someone else; I guess I showed the tiniest bit of edginess, nothing big. Then when she told me how much I owed, a little over $400, I felt myself wince. And that's all it took. The poor lady clutched her throat, her face went red and from dry to sopping in a flash, then she fell off the chair. I cried out, "No!," at which point Death released his grip. Everyone came running from the back, saw what was going on, and called an ambulance. Which of course by now she didn't really need, but what could I say?

That was the good news. The bad news came moments later, as the ambulance came racing around the corner and ran over some poor old guy. I guess Death had his work to do. But the idea that it was rooted in my visit to the dentist bothered me. It really bothered me, that and the fact that I was very hungry. I hadn't eaten before my appointment.
Posted by dbkundalini at 4:56 PM