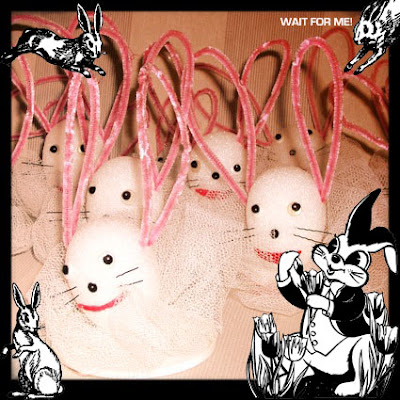 I've had a long and hard day, so I'm really not in any mood to make comments about the Easter Craft Sale at the shopping center. But I feel I owe it to everyone to say something, and I'll try to put a good face on it, regardless of how terrible it seemed at the time.

The day started badly. The set-up time is between 7 and 8 a.m. And for some reason my alarm didn't go off, meaning I overslept for the first time in something like 25 years. I'm thinking I subconsciously didn't want to go, and so whatever internal timer mechanism I have tried its best to spare me. Except I did need to go, since I'd already paid the exorbitant $40 fee for my table, up five bucks from last year.

After I did everything I had to do, including loading the bunnies in the car, and going to the bathroom, etc., I headed out to the shopping center, knowing it was going to be rough. Spots for the tables, except for the higher class people, the real long-termers, is first come, first serve. Which ended up meaning precisely how I knew it'd go, the other bastards would grab the best spots, leaving me, the latecomer, the crappiest spot in the world, a few tables past where even the diehard customers are likely to go.

I got a few nasty comments from some of the ones who know me: "Bedhead," "Look what the cat dragged in," "At least you're well-rested," and "Good luck -- You're going to need it." The worst part of the process of getting in was that I needed to make multiple trips past some of these cretins, giving them plenty of opportunities to level their best taunts.

But I finally made it, and got my stuff all set up: A nice blue tablecloth, my signs -- "Lovely to look at, wonderful to hold, but if you pop off an eye or mess up the styrofoam head, we mark it sold.", "Cute, crazy, cuddly," "No photographs or sketches please," and the price card, "$5 apiece, 2 for $9." Now it was just time to settle in for a day of bustling business.

I guess I'm always an optimist, at least going in. Then as the day drags by, I'm nothing but a realist, "I'm sunk, this sucks, I should've stayed in bed..." For customers I had the usual dregs, lots of lookers who can't be bothered to spend a quality minute examining my stuff, kids who have no qualms about bending the pipe cleaners, and preoccupied mothers who foolishly ignore their children's desire for a nice bunny. Then occasionally -- but never often enough -- one will be persuadable, and it's those ones I like. I'm quick to get their cash before they have time to reconsider. They might walk away and the kid immediately breaks the bunny, but no matter ... I just look the other way.

Around noon, I saw some clown with his phone out, snapping pictures of some of the crafts upstream. For which I came prepared. I whipped out two other tablecloths and covered my stuff, then prominently put the "No photographs" sign on top of the whole works. He got down to me and looked a little put out, but I only smiled, knowing I'd scored a major win for our side. Hell man, if you want a picture of a bunny, buy one, then go home and photograph it to your damned heart's content. I don't want my stuff on Pinterest. Knock off someone else's art ... or craft, in this case.

It slowed to a dead crawl around 2 p.m. I was able to get out and talk to some of the other crafters. My day was terrible but they had even more gripes than me. That's one of the great things about craft sales. If you really want to hear complaints, crafters should be your go-to guys. The sale was poorly advertised, the shopping center doesn't respect us, the increased table fee was egregious, and a lot of the browsers are only in the vicinity to use the bathroom; they don't care about us. Plus, we kick around the bad economy and people's decreased disposable income, despite the evidence to the contrary, poor people going by carrying $5 coffee and their grubby little rug-rats eating $4 cotton candy.

I had a few anxieties of my own. One, my sales were worse than previous years. Two, just because I caught that one photographer doesn't mean I didn't miss a few others. A few of these knockoff artists have someone distract you with friendly talk, then they're snapping pictures, only to have the friend drop you like a hot potato when they've got what they want. On that point, I suspect the friendly girl with the deep cleavage who visited with me -- stunning eye contact! -- might have been a photographer's confederate. But she was sweet enough it was almost worth it. And, three, offering a twofer (2 bunnies for $9) about kills my profit margin. I like the come-on aspect of it, I just have to hope not too many customers abuse it.

Oh, I used the word "customers." In crafter language, the word for them is "fresh meat." That's one of the biggest complaints. Listen for it if you get close to a crafter. If they're complaining about "Not enough fresh meat," all it means is they wish we had more customers. If only the stinking shopping center would advertise more!