I have so many problems with snow when it's at the height of its power, when it's melting I like to ridicule it. Taunting has always been my thing:


How the mighty have fallen! Thou shalt die the deaths of the uncircumcised by the hand of strangers: for I have spoken it. Good riddance! Don't write, don't call, don't drop by!

It's nothing but the wasted away reminder of its former self. You're not so tough now, are you? I could kill you with a teaspoon of ice melt. I'm going to be out here again in five minutes to beat you to death with a shovel. And the way you're stuck to the ground, it doesn't look like you'll get away. Look at me when I'm talking to you! How do you feel, seeing I'm walking quite unimpeded.

And it's true; I'm able to run circles around it. There's more grass and, unfortunately, more unraked autumn leaves, than snow. There's no slipping, no falling, no care, no concern for the diminishing white stuff. It's completely lost whatever it had that brought us terror. More talking trash: I've heard of being up to your hips in snow, but you're not so tough, my little toe's not even slightly cool. Is this snow or dandruff? Nice sunny day, huh? I can't hear you! If I threw you in the road, no one would notice! They wouldn't send a truck out to scoop you!

I'm getting in some good licks. Although part of me knows I'll eventually have to pay for it, since snow will again one day have its strength. So we shall tussle, but today, right now, I'm the one with strength. And when I have the upper hand, when I'm able to dominate, that's exactly what I'm going to do, without hesitation, without mercy.

Then I go around to the north side, where the snow has a few more reserves, shivering in the shadows. Oh, hiding over here, are you? Come on, be realistic. It's time to cash in your chips, snow, you have no hope, give up the ghost. If you had half the balls you think you have you'd come over to the south side and prove it. How about a bucket of hot water to toughen you up? 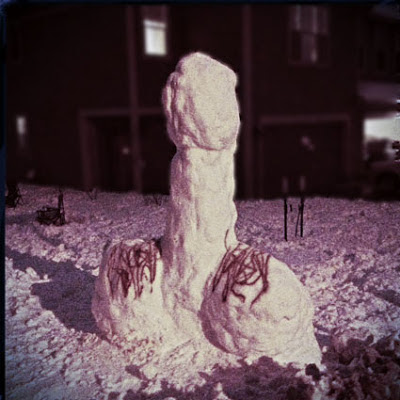 Yeah, snow, I hear you, you were a big man there for a while. People passed by and saw a revolting sight. We had old ladies backed up three blocks trying to see the snow man up the road. And I saw you, too, I saw your pride, your feeling you could do anything. At that time, you taunted us ... I'm the man, I'm the man, there's no man like me! Etc., disgusting stuff! Pull up your damned pants! 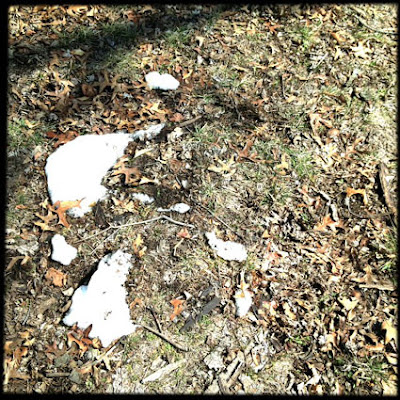 But you're not looking so hot now. Or perhaps you are looking hot, and that's the problem. This photo was taken on the exact spot where the snow showed off its enormous package. Admittedly, it was a giant that night. As disgusting at it was, it definitely put me to shame. But that was then, this is now. Now it's a few spots of white. Snow swimmers? I don't know.

It's about over. This is getting pathetic. Snow has had its day, and now its day is through, now it dies. You really had us going there for a while. Ha ha, but now, oh boy, you're finished! You sicken me.
Posted by dbkundalini at 6:31 PM