They Thought Dentistry Was Some Kind Of Hoax 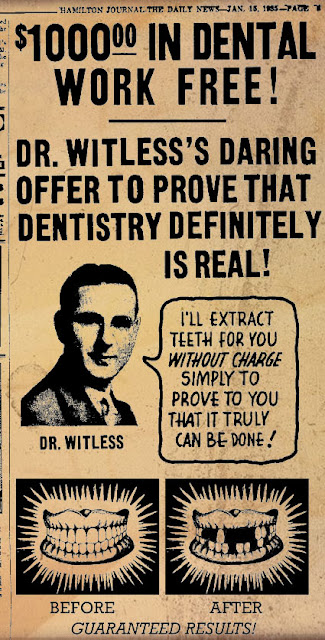 I was stunned to find out about this. But a little research, and it didn't take much, shows it's absolutely true. Dentistry started out with a great deal of suspicion. We're only lucky the first dentists stuck with it.

People tend to be skeptical. Full of doubt. But it's nothing now like back in the olden days, in the earliest days when man had barely made progress. Thomas Edison had to literally hit people over the head with the light bulb before they saw the light.

I was at the dentist's office just yesterday, and my dentist had only enough time to tell me the bare essentials of what went on way back when. Years ago, it seems, they didn't even believe dentistry was a true thing. Of course those who really thought it over -- the first pioneers themselves in dentistry -- saw it was logical: If you can tie a string around your tooth and pull it out with a door knob, surely a professional could help you with it.

And that might have been the problem. The average guy would obviously think, If I can do it myself why would I pay someone else to do it? Everyone has a sadistic baby brother who'll help out in a pinch, and he's built up enough animus, of course the rest of us are willing to help him, too, and how! They weren't thinking of root canals, crowns, or wisdom teeth, that are tough enough to ruin the knob, etc.

And not only that, they had a teaching from the Bible -- they being pious -- that suggested that when it came to teeth you just left well enough alone: In the day when the keepers of the house shall tremble, and the strong men shall bow themselves, and the grinders cease because they are few... (Ecclesiastes 12). The verse more or less says you use your teeth till they grind themselves to powder, then you spit the powder out.

But a few of the pioneers, the first men into dentistry, somehow had their consciousness raised, then struck out to convert others. And I would say they were ultimately successful, because as far as I can see, today there's more dentists than gas stations. We're crazy about our teeth, straightening, whitening, braces, polishing, cleaning. It's actually a little ironic. The first dentists were mostly doing extractions, but that's the one thing that's hard to get today. For some unspecified reason, dentists want you to keep your teeth...

I have the ad pictured above to show one of the pioneers, a certain Dr. Witless, who really has to receive a lot of the credit in proving people wrong. Look at that, he was giving away $1,000 worth of dental care just to prove the point that unrelated third parties could do dental work!

And from the looks of things, he was more concerned about simply making that point than in doing anyone's teeth any good. When he says, "I'll extract teeth for you ... simply to prove to you that it truly can be done!", notice he doesn't care whether the teeth need to be extracted, he's only doing it to promote dentistry. And just a look at his before-and-after graphics shows he didn't want to leave even the slightest doubt about it.

What do our current dentists think of those olden times efforts? The way I take it, they're amused by the quaintness of it, while also realizing how much better it makes them look. Because we're so used to modern painless techniques that we see the pioneers as barbarians. True, there is still a lot of discomfort today, shots, your jaw propped open for 20 minutes, mouthfuls of sticky stuff when they're making impressions, and the fact that the free floss is a measly 5 yards. But when you think of the olden days, you're happy, and willing to buy your own floss.

We've obviously come a long way. The skeptics are all gone. The so-called Dental Truthers have all died. Thanks to guys like Dr. Witless, who were willing to pull out every single last tooth in their heads, and free at that, to make the point. And, really, if you left the office with nothing but bleeding gums and still didn't believe, of course there's not much he could do about that.

Today's dentists might be amused by the pioneers. But they also owe them a huge debt. They were the ones who led the way, the trailblazers, who gave the practice of dentistry a foundation to build on. And if it weren't for them, just speaking for myself, my smile would look worse than it does. I'd be a mumbling fool. And worse, probably a virgin.
Posted by dbkundalini at 9:41 PM