Monet Did It Better 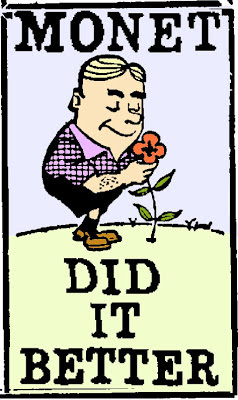 It's my day to grind an ax, or stand here with an ax to grind ... that's how the phrase goes. I'm sorry if you came looking for something better. Like someone in a good mood. Sometimes I'm edifying, sometimes I'm just peed off, and this is one of those subjects that does it to me.

How many times have you heard the old taunt, when you've done something, anything, that someone, like five years ago or whenever, did it better than you? In my opinion, it's a wonder anyone's ever been able to do anything! Although maybe those people, the true creators, have had the good sense not to listen to the naysayers. All those folks who'd just as soon you knew, no matter what you do, not only is it not good enough, but someone else already did it ... better.

LOL. It's kind of funny, really. Not only that they say it, but that I let it get to me. As to the last point, of course I know better. I usually have a fairly thick skin. I'm not generally given to listen to criticism. I really don't have that many people around me who are stupid enough to chime in their little piece. Social couth. Or cheer you along, whatever you do, "Good job. Helluva effort." No, it's always the true critic, your basic Rex Reed wannabe, who has the background to know what's been done in the field, then the balls, to tell you to your face, "So and So already did it ... and better."

My first thought has to be, "How am I supposed to know what everyone else has done ... and how well they did it?" The internet helps on this, but, still, is it expected that each one of us is spending our time 24/7 researching the world of what's been done, how it's been done, and what's left? I don't even know that there is a resource, a website, telling us what hasn't been done, or if it's been done how much better it needs to be next time.

Of course a guy might come up with something famous that's already been done. Just yesterday, I was humming a song, which I thought was a song from the '40s, and I hummed it to a friend, and she didn't know what it was, hadn't heard it before. I knew better -- I knew it was a song -- but I said, "Then I just composed a great song." Then later, listening to my iPod, I started searching around, and it turned out to be "Stardust." Then I remembered having seen the word earlier in the day, and that's how it got in my mind. In this case, though, the song I was humming wasn't better than "Stardust," because I was leaving out some notes.

OK, that's an isolated example. But there's plenty of lesser stuff, like this blog post, let's say, that either hasn't been done before, or it's not going to matter if it's better or worse than the last guy to attempt it. It's my thoughts at the moment, la la la, who cares? And that's the attitude I need to keep. Just simply accede the point, "Yeah, sure, someone else thought of it, and they all did it better than me, satisfied now?" It stands to reason: The history of the world is virtually infinite, surely some caveman has done a fuller treatment of the subject. For all I know, there might be entire books on it. Or theses, well researched.

So, where's that leave me? Fortunately, I'm a glutton for punishment, it appears, and I ain't going nowhere. And if someone's done that better than me, I'm going to have to accept it that that's true. I'll just be happy with my bare minimum of life and existence, knowing of course there are people at the absolute bottom who are living happily. As for "better," at this point it's like a rock sitting still better than a truck, it doesn't matter.

They might come around with counselors. They're trying to spoon feed me psychological advice that everything you do, regardless of how much better than you it's been done, is your own life. And that life isn't meant as some sort of competition where only one can survive and advance. I'm able to mutter a forlorn, and at this point somewhat inscrutable, "Yeah, tell that to the Dave Clark 5" and immediately fall into my soup.

Of course they keep working with me. It's someone's job to do it. And the disability pay I normally get, because of my game toe, is meant to cover psychological recovery in the event of a total psychic crash. They keep going with the happy talk, taking me for minimal walks, and giving me the personal care of young nurses.

Finally, I'm in the home, and I'm able to scratch a picture of a flower on a paper with a crayon. When some asshole says Monet did it better, but by now I'm not even hearing it. Monet probably heard it from the folks around him, too. Some other artist from years ago, whoever they might have been -- Growlie, Walnut, I don't know any names -- Growlie did it better than you ... Walnut had a better technique, and at least his art stood for something.

I grew up with the idea that everything I did was great ... and that's where we'll leave it!
Posted by dbkundalini at 3:12 PM