Are Pharmacists Happy in the Grocery Store? 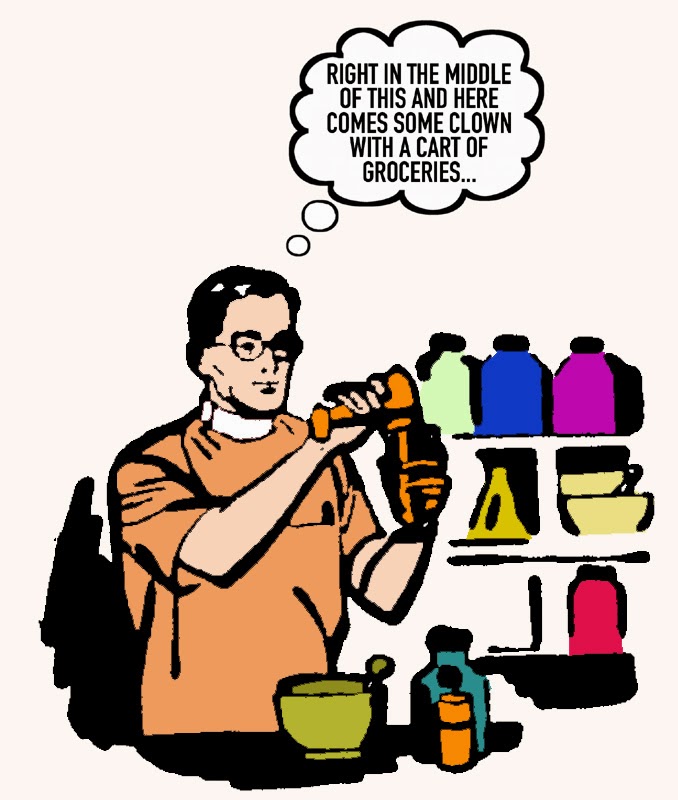 I have no problem with pharmacists, none. Of course I wonder about them from time to time, like everyone. Are they happy back there separating little pills with a knife? Do they resent that you just called in your prescription and you're already there? Do they ever suspect you're not who you say you are, picking up meds for someone? That's an issue all by itself. I've seen husbands picking up meds for their wives, and vice versa, and as a guy standing in line, I wonder, "How do you know they're not scamming you?"

I do think pharmacists by and large don't have it as good as they used to. Like back when they had their own stores, a place of their own, something to be proud of. Now they're in the grocery store, with people coming to them only because they're handy because you go there for groceries. Of course they still wear the funky shirt, as though that really means anything under the circumstances, but it's their tradition. Everyone needs those traditions to keep them at least slightly proud. But it can't be the same.

Actually, when I go to the pharmacy at the grocery store, I sometimes have them ringing up a few grocery items for me, and I wonder, Are they pissed off? After all, they went to school not to be a grocery checkout guy, but a pharmacist. They took classes, they ingested a whole range of medicines to know the effects first hand, they got a diploma and multiple certificates for any specialties. And now here they are ringing up my box of popsicles. Seems insulting, but it's two birds with one stone. And it's their fault. If you're in the grocery store, don't be surprised if you're stocking shelves later.

They do a pretty good job, though, and it is a lot more convenient than it used to be. Years ago we never called in a prescription refill. Plus you had to go in to get it. Now you might pull up to the drive-through window, etc. And ask extra favors, like, "Could you be a dear and run and get me a bag of macaroni and tomato sauce?" It makes them happy, I hope.

But good for whatever ails you, that's what I want! With the closest thing being something like Ibuprofen or Alleve. We used to get Red Dope, which is what we called it, and we put it on everything, cuts, scrapes, bruises, toast, pizza... You put it on -- say you're a kid -- and everything's immediately better. And also, along with Red Dope, we had Castor Oil. Grandma was big into Castor Oil as a cure all. I don't know if it was really that great, but it tasted very potent.

Right now I'm only "on" one prescribed med. How about that for age 62? In addition to it -- cholesterol med -- I also take a baby aspirin every night ... for whatever ... veins not to clog up, I think. So I'm doing pretty well. I know a few people who have one of those trays with slots for everyday, and they're jam-packed full of things, morning, noon, and night. Somehow I've avoided that, so far.

I'm glad I'm not a pharmacist, not just for the various indignities they have to face, but for all the sick people they're helping everyday. But by now most of them have built up a pretty good immune system, so maybe pharmacists live forever.
Posted by dbkundalini at 6:48 PM