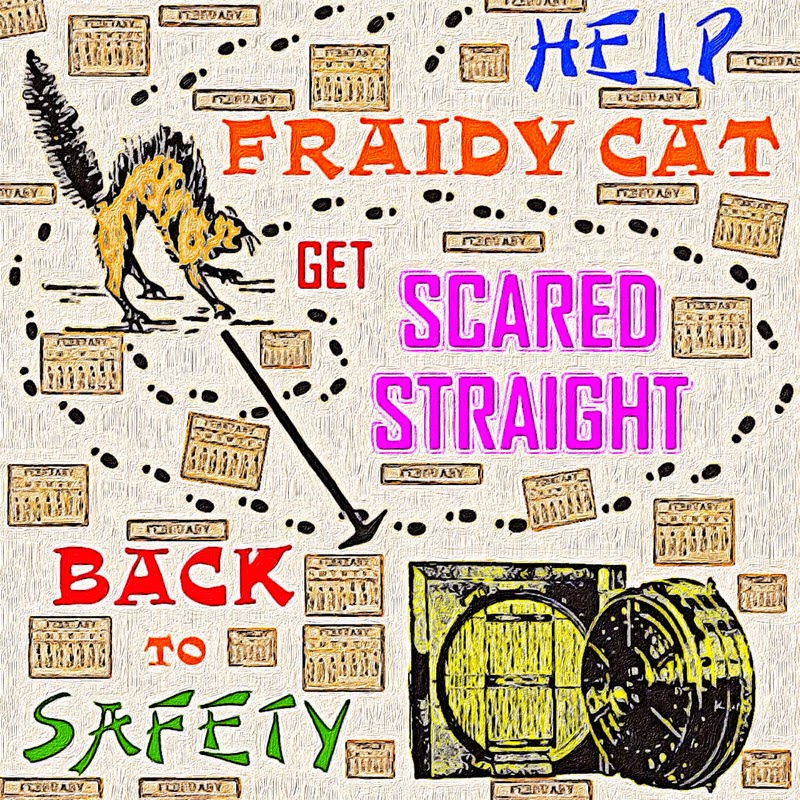 This is an adventure where I am threatened with bodily harm or death, certainly spitting. But my life is enhanced, evildoers are vanquished, and it's a new day of victory and bragging rights. I've been taking on the month of February, trying to get the calendar changed. We would keep the days, just allocate them in the year differently. I never imagined, though, how many people have a vested interest in keeping it as it is, something so ridiculous, a stubby little month that'd frankly be better off put out of its misery. One man's opinion.

As it turns out, I was reminded of a major "vested interest" locally. It's weird I forgot this, since my own father worked there 40 years,  a plant on the north side that makes calendars as one of its biggest products. He used to come home and tell me how many they made, millions, and how far in advance they made them, 10 years in advance. That's a lot of faith that the calendar's going to stay the same and no one will agitate for taking out a particular month!

The adventure started when the newspaper mentioned my blog because of the local tie-in with the company and calendars. The vice president called and invited me down. They'd already pulled the file on my dad, who's now dead. And saw from the records that he had a son, and they also looked at their insurance records -- kind of weird -- showing that I'd received medical care over the years on their dime, paid for, the VP said nicely, with the very calendar I was against! I got the message. Because I got my tonsils out, and a thorn out of my foot, and once rode an ambulance, among other childhood illnesses, I am beholden to them and can't criticize the calendar...

But I wasn't afraid. They wanted me to come and look things over, and try to sway my opinion, so I said I would. I got there and saw they had a nice memorial to my dad in the hallway. As if! I had to assume they'd just put it out. No one would have a memorial to a dead employee in the hall 15 years later, would they? But it was a nice touch, an eternal flame, the standard photo of him, and a quote, maybe a little too convenient: "I've always considered our calendar mankind's greatest achievement, B.C. or A.D." I don't know when he said that.

On the tour, the plant was impressive. It was a lot bigger than I thought, vast, numerous football-fields big, with many dark corners, made even darker by the stacks and stacks of pallets of enormous calendar sheets still waiting to be cut and assembled. Just like Dad said, a lot of these calendars were for years way off, 2023-2027, etc. I examined some more closely, just to satisfy my own curiosity, to see if they had February included, and, yes, they did. Such faith! Although in their defense, most were printed well before this became a global issue on my blog.

I kept walking, looking around, straining my neck to see more, and after a time I noticed my own footsteps were getting louder, until, pausing, I was stunned to realize--- I'm alone! Everything was dead silent. In the dead silence your breathing's very loud. And the pulse at your temples. My eye caught a camera rotating off at an angle. A voice over the speaker crackled: "Each of those pallets has calendars that include February for all the years. Think of it as time frozen in time, ready to be thawed when the time is right. But if something were to happen to February, say, by your interference, all our work would have been in vain. And people would be out of jobs. Your dad never wanted that."

So that's their game? Perpetuating full employment based on protecting one worthless little month. And taking away my freedom of speech. The voice droned on and on, about the little children who would suffer, the families, the grocery stores, real estate, insurance parlors, etc., right on down the line. It all connects together, they said. "If even one of those pallets goes to waste ... you will be personally responsible for the death of many." Very menacing stuff. I was expecting a sniper, and there were random noises, as though I wasn't alone.

But being apparently alone, with my own breath, pulse, and the whole shebang, and the excruciating tension -- as well as the voice, I thought, trying to take over my conscience, to short-circuit me, I guess I freaked out. "These sons of bitches are trying to scare me straight!" I thought. I couldn't think beyond that, except, feeling threatened, to freak out so completely that it's hard to describe what came next. Apparently I commandeered a forklift, and stacked ton after ton of pallets to the ceiling, then moved the fork in such a way that it toppled the whole stack like Jenga. Right there -- assuming it was between four and eighty pallets -- that'd be many millions of dollars worth of calendars!

Obviously I continued this righteous work until all the lights came on. Sirens and big horns were blaring, and people were running everywhere, waving their fool hands and all yelling at once. They finally took me into custody, marching me back through the vastness of the plant, then back to the main hallway. A lady was taking down Dad's memorial and putting it in a garbage bag. While I'm crying out anti-February slogans, belittling Leap Year; in my opinion, Leap Year's a great indictment of February, a month that changes its number of days every whip-stitch. Sheesh!

We got closer to the main offices, where I was exposed to the view of a mob of workers, all of them spitting on me, or trying their best. Last was the old janitor, who did spit on me and immediately mopped up his own mess. That's the kind of responsibility I like to see in a worker. For his sake, not for any of the other bastards, I would forbear and cease the frantic sloganeering, at least till I considered all my options.

Looking back on it, the key thing is they tried to scare me straight, but with my heroic actions, and their mad dash to stop me -- the cowards -- I obviously scared them straight. They'll know better than to ever have me in their fool factory again and to trap me alone, or think they can sway me from my tightly held convictions just because they trot out a picture of Dad, light a candle, and have one of his well-known quotes in gold lettering, even raised printing. I don't remember him ever saying that, but it sounds like something he would've said.
Posted by dbkundalini at 5:29 PM