The 10 Days of Old February 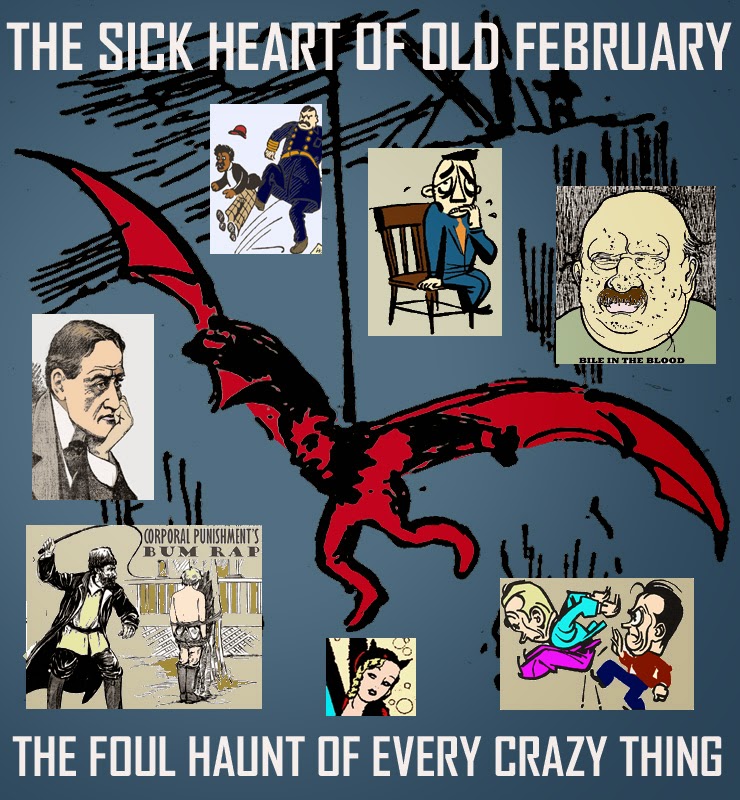 I've mentioned it a few times that our plan for destroying February actually preserves 10 of its days together. It's really been quite a process hammering it out, as the team often couldn't see eye to eye. We blamed our disagreements on February itself, since, obviously, it always brings out the worst in people. As a great example, I happen to have a headache tonight, very uncharacteristic.

The other days will divided up among the other months. But 10 days, right in the heart of it, starting midway, will remain as a kind of stump. Like when you cut down a tree and leave a stump. Then everyone who passes by taunts that filthy stump, "You're not so tough now, are you, tall tree! You thought you were such a big tree, baddest tree in town, quick to lord it over the rest of us! Now look at you! You're hacked to the ground! Just a worthless stump, no glory, no grandeur, nothing to brag about now, is there? Ha! Of course not! Your day of pride is gone!"

Anyway, the team probably needs no introduction. I insisted on the best, men like myself of impeccable judgment. There's of course one holy man, Pastor Wadd, from my church, who counsels men daily on the folly of sexual addiction. The others -- maybe I could've gotten better, but it's only February we're working on -- are men I knew I could get on a minute's notice. They've never been chosen for anything so it's only right. Each one tends to shoot first and not ask questions. Men after my own heart. Only the best. You've never heard of them so I won't list their names.

I explained the parameters of the task to them. A 10-day stump of old February, with those 10 days being the foul haunt of every crazy thing. Pastor Wadd, naturally, wanted to get his specialty in, as you'll see in the list. I actually spoke against it, because I don't like blue material, but he insisted on the righteousness of his work. Also among the parameters was that each day should be thematic, lifting to the fore the foulness of the month we've destroyed.

1) Trash Talkin' -- I personally like trash talkin'. Depending on your capacity for rage you can really work up a head of steam. As I've confessed before, I even trash talk melting snow: "You heaped yourself in enormous drifts and thought you were so tough! But look at you now, little more than a silly dusting! I need a spoon to scoop you, not a shovel!" The first day is for all of us to trash talk each other, giving them what for.

2) Dry Heaves -- I feel a sickness coming on. I'm queasy, a little lightheaded, down in the gut. But there's nothing there, I haven't eaten since the day before Trash Talkin'. No appetite, worrying about what they'll say about me. So I go around, just dry heaving, which is actually more painful than coming up with something. Because it just goes on and on. With everyone doing it. If you can't think of anything to heave about, I'll be writing some very gross things that day as a public service. Grapes that seem like they're eyeballs, etc.

3) Shivs a' Flashin' -- This is the day that we open every jail and prison and let the prisoners go free! Everyone from simple murderers all the way up to the tougher bastards, given to outright meanness. Of course they'll be up to some mischief. But since we want society to survive, they'll be on their honor to not commit any terrible crimes, and, this is something we'll insist on, they have to promise to return to prison the next day.

4) Piss 'n' Vinegar -- The term's fairly self-explanatory. Lots of piss 'n' vinegar. Whether you want it to be just sassiness, or actual piss and vinegar. There'll be lots of beer drinking and salad eating. Don't forget to watch your step, the gutters will certainly be running yellow that day.

5) Sexual Addiction Counseling Day -- Pastor Wadd's day. He has a curriculum called "Solomon's 1000 Wives." The gist of it's something like this, that all of us have appetites, some small, some medium, some huge. But one man can only handle so much. Wisdom is knowing your limits, then whittling it down, by personal discipline, to one man-one woman. Take me, I could probably handle a convertible full of girls, give or take, but I know better.

6) Mass Maypole -- I've always thought the maypoles of olden days were something on the very edge of impropriety. They have the ribbons, they're going back and forth, and it's all quite dainty. But speed it up, intensify it, and it'd be explosive. It'd be an insane sight. It might even erupt into something that'd make Solomon look like amateur hour, such a bacchanalia, maypolers falling into one another's embrace.

7) Gross Out! -- This is more a day for the kids, sticking their tongues out at each other, disrespecting adults with hand gestures, and making foul noises with their hand under their armpit. I tried that the other day, and something's wrong, I can't do it anymore. I guess my flesh up there's a little too saggy to get the good suction. And to think I used to do "I'm Popeye the Sailor Man" at school assemblies. I even shaved my armpits, hoping to get it back, but no.

8) Cocoon Nightmare -- Anyone originally born during any of these 10 days has been excluded and kept cooped up at home. As though they were in a cocoon the whole time, but storing up enough orneriness and cussedness that when they come out they make it memorable. The rest of us are laying low today, having survived so far and not wanting to tempt fate. It's not called Nightmare for nothing, because their pent-up energy is dangerous. This is actually the day when any dishonorable prisoners from Shivs a' Flashin' are scared straight and head back to the safety of the pen.

9) Mardi Gras -- The great day of celebration, for any devilry that no one's done thus far. Parades, flashing yourself, getting beads, the whole thing. I've never been to Mardi Gras so I'm not sure what goes on. But I'm sure this won't be the usual tame brand.

10) Lent -- The old five-week period of penance and spiritual disciplines is compressed into one day, everyone's faults by now being crystal clear. No measly daub of ashes on your forehead -- Oh no! -- this will be like the Desert Fathers, flagellation with whips and glass shards, nails, the whole works, gargling firecrackers. The life we've lived these 10 days is such that if Lent has any value whatsoever, this is when it'll be proved.
Posted by dbkundalini at 8:21 PM