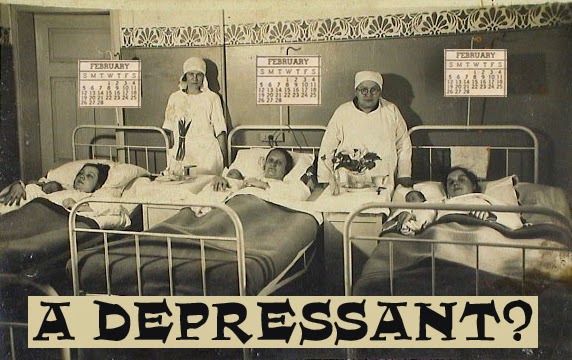 Among the great questions meant to draw a distinction between two equally true points of view, the classic example is the chicken and the egg, which came first? Further examples are then multiplied: fried or poached, white or brown, original recipe or extra crispy. One choice is as good as the other.

It's not my purpose here, obviously, to examine and answer all the questions man has had over his tortured existence. To do so would be beyond the skills of even me, which is not to say it should not be attempted. The question would have to be Why?, if it can't be done, which is a question for another day. What drives me today, much like the prophets of old, is something much more vital in world debate: February -- Stimulant or Depressant?

When it comes to everyday stimulants and depressants, chemical interactions come into play that settle any debate. We take the substance -- such as sugar -- and examine its interactions in consumption. These are studies, incidentally, that I personally conduct everyday of my life, candy, popsicles, or just straight from the cane. So far, I can say it's all good.

When it comes to the month of February, of course that's a marking of time, different from sugar. Assuredly it's not a chemical compound, subject to the lab. Still, the question is a good one: Is it stimulative or depressing? When we answer that huge question, we will have arrived at the truth.

If the reader will permit a shortcut, just let me say that I haven't asked anyone their opinion. But just looking around the room (I'm at the public library), I'll simply guess that half the people here would say it's a stimulant, half would say it's a depressant, and the rest wouldn't understand the question. Many of them are children; in this day and age I'd be afraid to even talk to them. (Has it ever occurred to you that parents now are the same kids first tethered to dog lines to keep them safe? Naturally they're touchy.)

I have said all that to say this, that I shall be the tiebreaker. For me, February is a depressant. It is well known that I don't like the month, having publicly advocated against it. I've openly sought to have it destroyed as a month, with most of its days then being added to other months, with a 10 day period made up of renegade February days leftover as a kind of no-man's land in time. All kinds of weird things could go on in that period, zombie parades, human sacrifice, Mardi Gras, horror movie marathons, with prayer and fasting (Lent).

For me, it's not just that February tends to be a downer in terms of weather; it's winter's halftime. It's just that I don't like it. The name February reminds me of burrs, or being cold (brrr), or having fur stuck in my throat. I'm choking even now as I write this, trying to hack something up, something not even there. That was also one of my ideas, to rename one of the 10 remaining days of February Dry Heave Day.

Frankly, I'm not even the kind of guy to get down, depressed. For me everyday's a new day, a day of wonder, a day of opportunity, except -- and this is huge -- when February gets in the way. So to say it's a depressant is really to say something; I'm despairing of life itself!

On the other hand, I've been standing boldly, loudly proclaiming my opinion, and even holding forth on the street corner protesting February for most of the last month. And I don't know that I've ever felt better, perkier, and on top of my game. To that extent then, ironically, February has been a stimulant! But the key distinction to be made, before anyone declares victory for the month, is that I can't see myself year after year stimulated while acting for its destruction. Any worthy goal, the success of which is forever in abeyance, for me becomes a depressant. I was late growing pubic hair, so I know what I'm talking about.

The predictable conclusion is that for some people February is a stimulant and for some a depressant. Maybe it's this, maybe it's that. For me, however, and this is where I hold sway, having the final word, February is a major depressant, that needs to be destroyed, now, if not sooner.
Posted by dbkundalini at 6:34 PM