Your All Bad News Horoscope 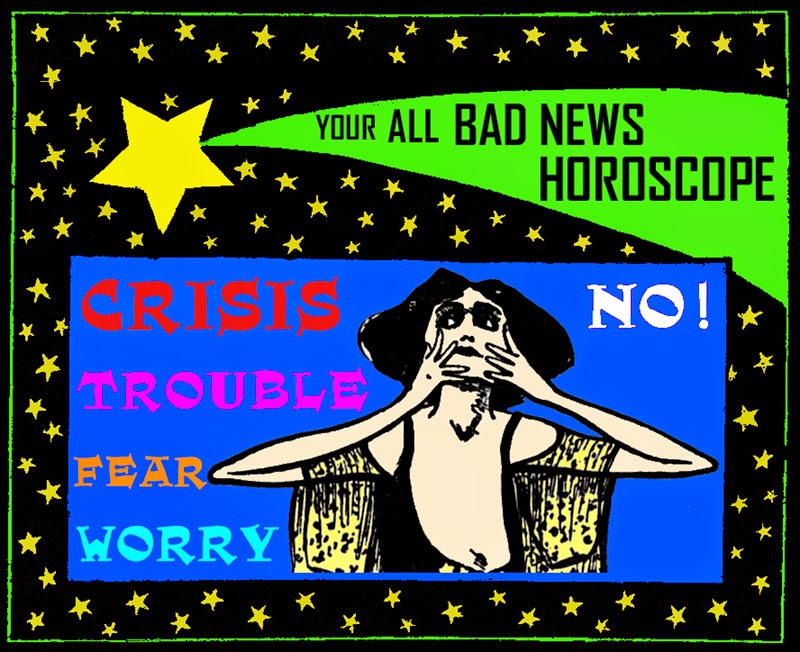 Scientists tell us there's more stars in space than grains of sand on Earth. And there's far more grains of sand on Earth than there are people. Meaning, if you think about it, there's at least enough stars that each us can have one of our very own. So is it so hard to believe that there's also a bad star out there with your name on it? Always portending disaster.

I know people like bad news. True, we don't always like it about ourselves. But bad news is what sells, according to folks in the business. And of course it's better to know than not, so, on the chance that it might do some good, we could try to get ahead of it and avert it.

With all that in mind, I had the great idea of a horoscope column in the paper dedicated to nothing but bad news. Diseases, accidents, various cautions, take it slow, etc.

Capricorn (Dec. 22-Jan. 19) -- Bad news is coming your way, when a long lost parent shows up, until now thought dead, but alive and in serious trouble, probably massive debt.

Aquarius (Jan. 20-Feb. 18) -- There will be a mass escape today of birds from a turkey farm. Most of them will make their way to your home, with some entering your closet and chewing your clothing to nothing but buttons and shreds.

Aries (March 21-April 19) -- The tree in your front yard that you've always seen as protection against an out-of-control vehicle will develop sap rot and need to be cut down early this afternoon. Later tonight, a drunken semi-truck driver will jump the curb and careen through your bedroom wall, killing at least one person. If you happen to have a date, it'll be two. The driver will survive.

Taurus (April 20-May 20) -- Your church will burn down this week. There will be a massive financial drive to rebuild. You'll be expected to contribute, even though you'll lose your job tomorrow.

I know what you're thinking, those might be a little too specific. It's hard to believe that so many churches will burn down all at once, one for every person born under Taurus. Or that turkey farms will have such bad luck and those under Aquarius will bear the brunt. But maybe horoscopes are tailored only for those who actually read them. Meaning, if I don't read it the turkeys stay put? Which doesn't make much sense; how does a turkey know if I read the paper?

Probably our best horoscope writers have the right idea. Keep it so generalized it wouldn't really make much difference if you were Virgo or Capricorn. I'll try a few.

Gemini (May 21-June 20) -- Hold off on making any decisions, any decisions whatsoever, including the decision to follow this advice. It's going to be bad.

Cancer (June 21-July 22) -- Your horoscope looks so terrible today, I haven't got the heart to even tell you what it is. You have my sympathy in advance. Maybe pretend you're a different sign today. If it's any consolation, the problem doesn't have to do with turkeys.

That's probably enough. I'll run it by a few syndicates and see if they want to publish it. It's very compelling. On a personal note, of course I'm a Capricorn. Both my parents are not just thought dead, they are dead. I was there when my dad died, but I took everyone's word for it that my mom died. Could it be? Is she suddenly going to show up, in serious trouble, perhaps massive debt. I need to go lock my doors.

Confidential to George in Syria -- You're part of a terrible struggle. You won't survive.
Posted by dbkundalini at 7:07 PM