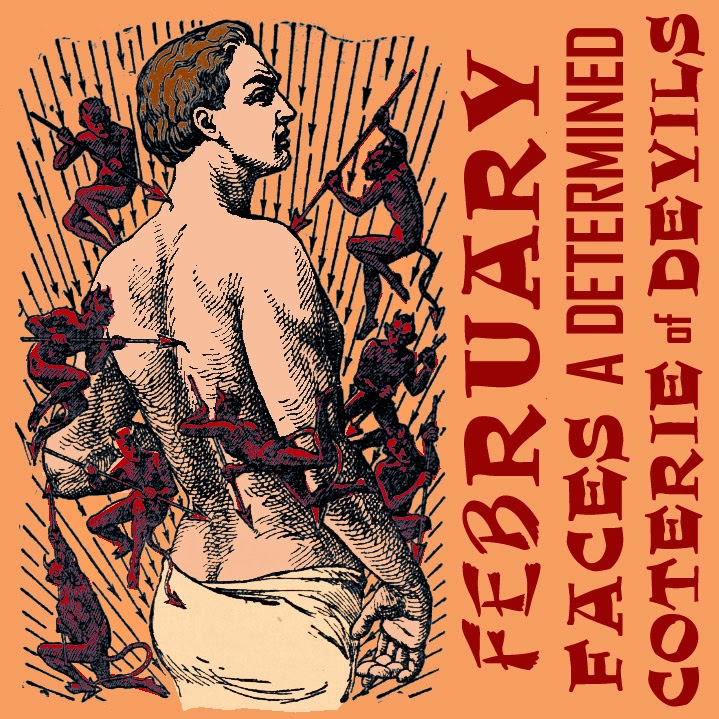 Note: This is largely a fictional account of what I'd love to see happen to February. Yes, I'm trying to destroy February as a month, but, no, I don't (necessarily) want to accomplish it by violent means. Still, how satisfying it'd be -- one of those wish fulfillment things -- if my peaceful values could be just slightly different, and I could see a palace assassin plunge the dagger in, and watch February writhe in pain on the floor and finally die. Am I right?

The council of months was underway at the palace, high in the atmosphere somewhere, the various lords and ladies of time in the large courtroom awaiting their annual decisions. Decisions pertaining to how the kingdom would measure time for the year. Would it be as it had been for the last 10,000 years, with no variation, or could this be the year there might be a change?

As a lowly guest, being an acquaintance of a friend of a day in January, I stood behind a curtain in the very back, straining to hear, wondering, Might February be out? I had no reason to hope, but, being a hopeful guy, I couldn't help whispering a slight prayer to that effect. The same prayer I'd prayed the last 4,000 years.

Trumpets sounded, meaning the Council of Months' business session had ended, and they'd be returning to the court and to the great round table. The table itself was a matter of some controversy, true story. The vote had been 11 to 1, February outvoted again, who, inscrutably, always agitated for a rectangular table. My opinion, February would do anything to change the subject, to give us a reason to think of anything else but its shortcomings. And that's true, when you're misshapen in some way -- say you've got only 28 days to your name -- you tend toward strange eruptions around your betters.

So the months gathered before us and we listened for the announcement. There would be no change to the calendar. The vote was almost unanimous, 11 to 1, and the predictability of time had been maintained once again! February shifted uneasily in his chair, then in a pique slammed his fist to the table. Obviously he had lobbied for more days. I muttered to myself, "What a disgrace..." The other months were rolling their eyes and showing signs of irritation with yet another of February's many annoyances.

It had been widely hoped, not just by me -- like one of those impossible dreams -- that at some point the other months might just vote February out entirely, then divvy up its days between themselves. I'd long hoped they'd keep a kind of stump month, say with 10 days of the old February, and for those days to be a time of revelry and cussedness. I think it'd be good for society -- rife with criminality as it is -- to get it out of its system all at once.

Little did I know we were closer to that happening than I ever had reason to expect! For behind the scenes, behind the curtains, the plot was already in motion. An assassin from a violent group called the Coterie of Devils (represented in the picture as a literal coterie of devils) lurked. We didn't know a thing about it. But all of a sudden, in a flash, this big burly guy with no shirt and the hairiest back I ever saw sprang from a hiding place and plunged a dagger into February's back. There was an unbelievable gasp in the room, many exclaiming, "Conspiracy!", and I myself distinctly gasped the following words, "Well, hush my mouth!"

But what could anyone do? The guy was a stabbing machine, going like speed typing, and the other months, weighed down in their royal robes, and not being trained for defense, were motionless. February took at least two dozen lightning thrusts. Then the assassin, in one last act of boldness, mounted the table, dropped his pants, and mooned in the general direction of February's bloody dying form. This daring gesture accomplished, he leaped to the floor and ducked quickly behind the curtain and was gone.

I sensed the mood was a bit weird, like the usual miasma that goes with shock. Sure, no one liked February, but having him stabbed by an assassin? That's damned tough to endorse. But I decided to go for it, and stood strong on the table, waving a bloody napkin from February's place at the table, and shouted, "Let this be a day of independence for the progress of time and its descendants!" And what's this? The bastards booed me down, and I had to slink out of there in total disgrace, excoriating myself in no uncertain terms, "Too soon, stupid, what the hell were you expecting, you stupid idiot?"
Posted by dbkundalini at 7:19 PM