February -- Too Soon to Declare Victory 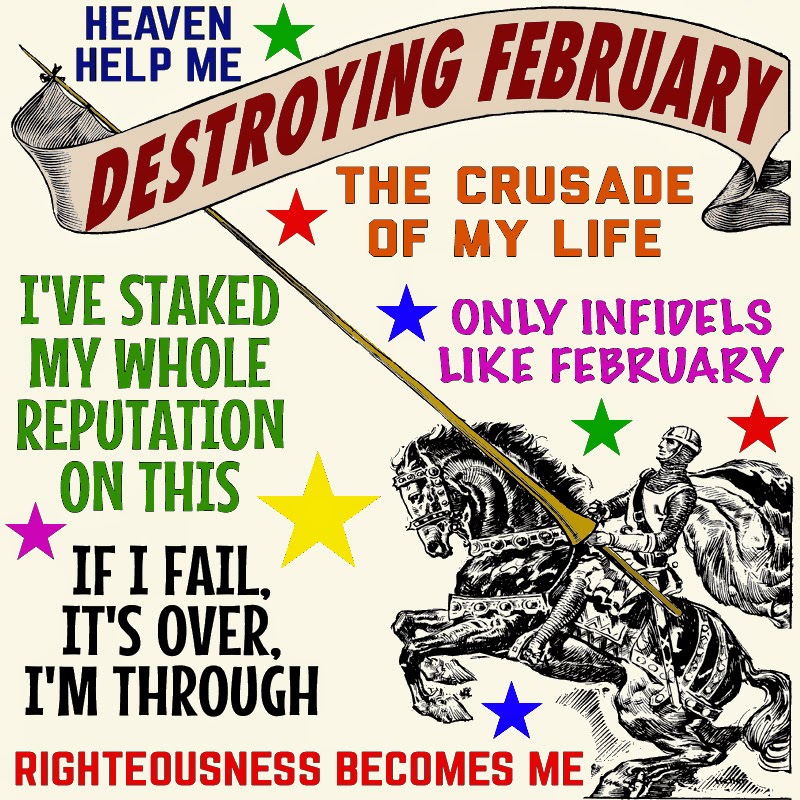 We're just this far -- a smidgen of an inch -- from proudly declaring total victory over February, and once and for all destroying, annihilating this infernal month.

But it's always that last stretch that can be tough, so we're taking it cautiously. One thing I do not want -- above all -- is to declare victory, then become a worldwide laughingstock, and, perish the thought, having to face February again next year amid heckling, laughter, finger-pointing, and other derision. There's already kids in the neighborhood setting my garbage on fire, just warming up for the main event, probably, and since I've been tossing my dead mice in there, you can only imagine the smell.

I hate the attitude I'm getting. But the world's come a long ways from the touchy-feely place it used to be, that my grandparents told me about, back in the utterly bleak days of the Depression, then World War II. The way they told it, they were just happy to survive. I knew I came from hardy stock when they told me the tough times claimed the lives of about half my relatives. Ground under the wheels of turmoil, leaving the rest to scamper for safety in a field somewhere, a clearing behind some trees. Those were great times, but touch and go, like when Grandpa's overalls were caught on a fence and Jap planes narrowly missed him with a barrage of bullets.

Yes, in many ways the good times are well behind us, as far as I can tell. And I'm usually an optimistic guy, believing the future can either match or surpass the past. This, despite what they say about rising oceans, creeping glaciers, falling meteors, the occasional fishhook in your finger, and roving gangs of hopeless teenagers, hopped up on tattoos, video games, and sagging trousers. A few of them in hoodies have left the rest of us with no choice but to arm ourselves, patrol our neighborhoods, and shoot anything that moves.

The police, you can't depend on them, through no fault of their own; their hands are tied. They're beholden to old rules of "justice and fairness" handed down by the courts, the same courts that have now deserted us in fear and taken to underground chambers. We want the police to have the power to take out unbridled terrorism, but they're still awaiting video equipment meant somehow to protect themselves.

So you see the situation I'm in. I believe the world would be a better place without February, and I believe we're on the verge of making it happen -- demon warfare be damned, and burning mountains of flame falling into the abyss notwithstanding -- if we can just have patience in these last few days, a little over a week to go. When they say "Time will tell," certainly that's true in this instance. February will either prevail or it won't. I'm putting my money on its destruction, but I won't declare victory just yet. That's for a time to come, and until then we must give it our all, thrusting forward, or back and forth, as circumstances demand, believing that in the great climactic moment a decision to withdraw from the battlefield will present itself, and at long last we will rest easy.

But whatever happens happens -- what's important for me is to be certain that I gave my last ounce of strength in the cause. Equally important is to avoid, as I said, ridicule, humiliation, and retaliation. But that can't be the focus. The focus has to be to give it all I've got now, because next year will be too late. If I fail -- God forbid -- I can change my name, move, get new papers, find a militia movement, let's say, and take out my frustrations on society and its recalcitrance in mob action. Folks, you need to help me now. This is where Unabombers come from, the temptation and pull of which I vow to resist with all my might.

We've long now passed a certain threshold in February, having garnered quite a bit of support to destroy February through my blog. I've been in the news. Quite a number of people have rallied for the cause. The State Capitol saw a rally, thanks to the free donuts we passed out. Right here in town, at the courthouse, a few people also rallied. I regret to say things got out of hand and they destroyed some artwork from the 1920s. But on the bright side there's always someone who can make new artwork.

Stick by me, OK? And together we'll have our declaration of victory very soon. I'm going to do everything I can to make it happen. For the next week I'll only be sleeping seven hours a night, not eight. Dear friends, look up, for your redemption draweth nigh. February's going down!
Posted by dbkundalini at 8:24 AM