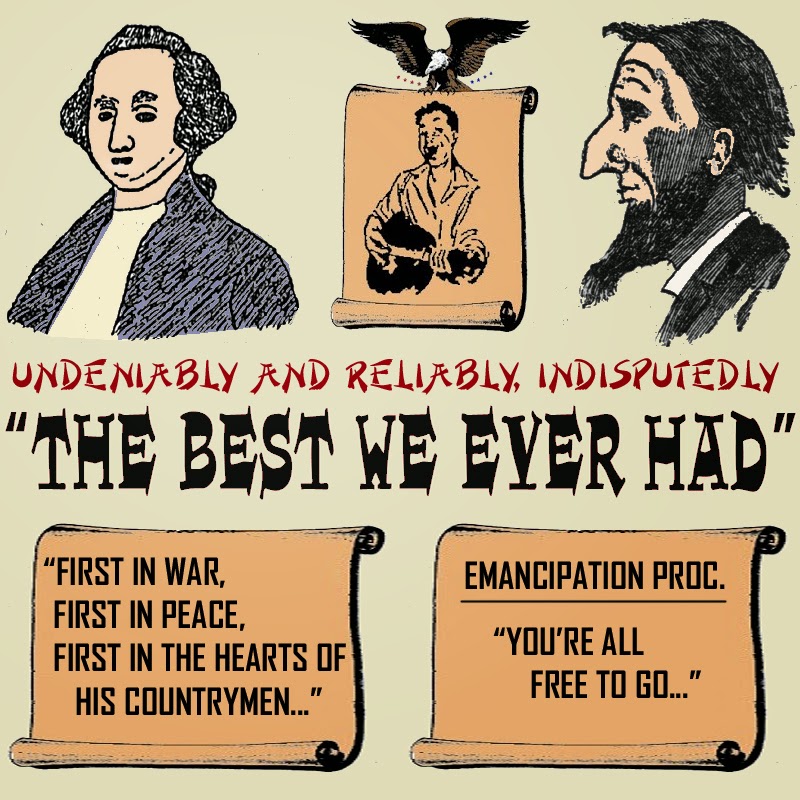 Today, I'm overlooking the whole Illuminati nexus thing with Washington and Lincoln and the shady dealings that elevated them to the presidency. Whatever secret information I may have intuited about them having to do with the Mysteries of Weird, I'm setting it aside. That's my serious face, this is my happy face, as I join the rest of the world in just blithely accepting the surface report of their service. Hurray for me! For one day, pyramids don't have eyeballs! The Illuminati aren't secretly symbolized in the American Eagle. I'm so happy! It'll be fun to see only what the other half sees!

I have to confess, though, I don't really know a tremendous amount of stuff about Washington and Lincoln. I was sick the day they covered them in school. But let me hasten to add that what I do know, I like. What's there not to like? These men brought us through whatever challenges there were at the time, and now we're fine. And they personally inspired me. So, everything I've managed to learn about them, while far from expert status, is something I feel I've done a good job retaining. We're always our worst critic -- as the old saw goes -- so I'd give myself only a weak A minus, perhaps dropping it to a strong B+ if I wasn't so generous. The other half of being your own worst critic is being the most generous forgiving your faults.

I'll go first with the main things I remember about George Washington. My earliest memories, looking through the haze, show a cherry tree, and him as a boy cutting it down. His father asked him about it, he said the Illuminati did it, and everyone lived happily ever after. Some time later, he crossed the Delaware, arriving safely on the other side. He was dentally challenged, being born with wooden teeth. One night he made a wish to be on the dollar bill, and woke up and it was so! I find that very puzzling; I couldn't wish myself out of an imaginary paper bag.

Next is Honest Abe, and what I remember about him, first, he was honest. He read by the fireplace, was a smart kid, then a smart man, split rails by day, and hairs by night, in debates. A little girl asked him to grow a beard, which he did, thankful she didn't ask him to wear pink panties and play with dolls. Later, with his beard, he led one side in the Civil War, annihilating the other. Finally, he survived all that just to be killed.

You can't get better than these guys. That much is certain. Still, though, understandably, we seek men for the office who at least aspire to be as good, if not better. That much has already been proven, as other men have held the same office. Each in his own way tried to emulate his forebears -- Washington and Lincoln -- and yet, however good they were, each fell way short of the mark. Except for Obama, who, like Lincoln, started with a team of rivals and only got more.


FUN FACTS ABOUT WASHINGTON AND LINCOLN:
(Kids, share these with your teacher for a sure A)

Neither ever jump-started a car, positive to positive, negative to grounded metal part, then disconnecting the cables in the reverse order. Too complicated.
Neither had any favorite records, always having to hear music live, or perhaps on a music box. In fact, most of the technological stuff we take for granted, they didn't.
Neither ever used a telephone, not the crank model, the dial phone, a telephone booth, or a cell phone. They had lots of time on their hands.
Both could speak English, no big deal.
Both had wives and lost their virginity at some point.
Both had a carbon footprint, but never as big and bad as ours.


DIFFERENCES BETWEEN WASHINGTON AND LINCOLN:

Washington never had to face a camera, Lincoln did. Washington faced painters, who quit before they got done. Lincoln's cameras achieved their goals.
Lincoln was born the same year as Edgar Allan Poe, Washington wasn't.
Washington died before the 1800s, Lincoln didn't live to see the 1700s.
There simply aren't many other differences between them. Both men were very similar to the other. What Lincoln lacked, Washington made up, and vice versa.
Posted by dbkundalini at 9:57 AM