The World Comes to My Dog 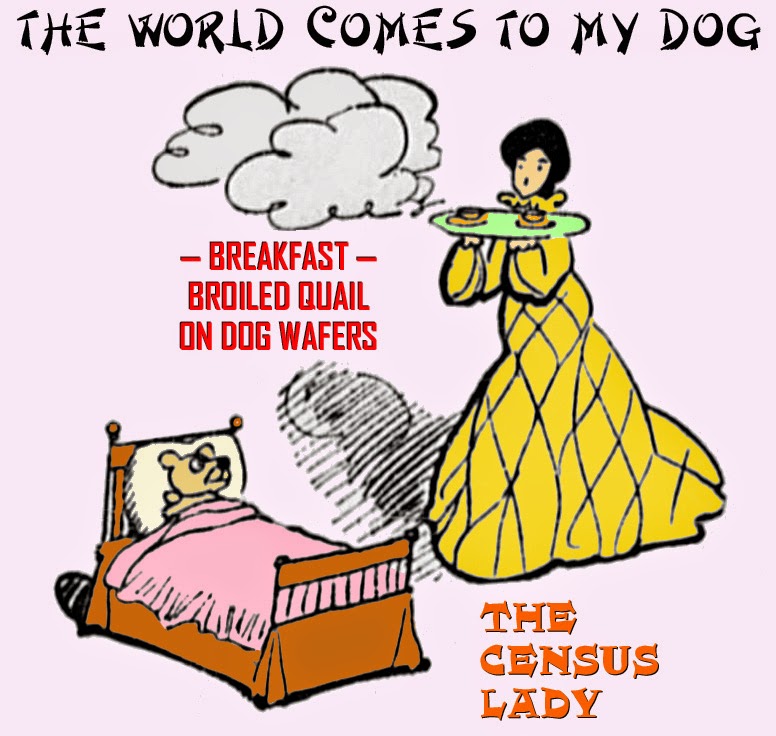 I thought I knew quite a bit about dog behavior. But I've been having problems. Roughage gets up, goes out, eats, plays, etc., and takes a morning nap. All that's OK, but there's some misbehavior, her avoiding my calls and not coming to me, inside and out. What could be the problem? I keep asking. First, obviously, I blame the dog. But she's such a good dog, could it be I'm doing something wrong?

Different ones stop by the house all the time and they get nothing but loving behavior from her. Just in the last few days there's been several visitors, the postman, milkman, paperboy, freezer repairman, census taker, and brush salesman.

They've been very respectful and admiring of her. She goes to the paperboy OK. He's small and non-threatening and pets her lovingly. "She's quite a corker," he said, putting another chew of gum in the corner of his mouth. Good boy.

That's not to say the others have been hands-off. The postman was very kind, taking the bag off his shoulder so she wouldn't think it was a place for kidnapping dogs, and put his hands down. You think of postmen as being very anti-dog -- and probably many are -- but this guy, I believe he said, has a dog of his own at home, and she even has a French-type name, Fifi, and, he said, she's very gentle with everyone. He had nothing but soothing tones for Roughage, calling her "such a good girl."

The freezer repairman was here next, whose whole life is looking at frozen meat all day, with some of it so thawed that it's lost its shape and become a smelly mess. That'd turn off anybody, so you'd think he might be put off by a dog. Being like meat on the hoof. But I noticed he's able to separate the two in his mind. He reached out in friendship. And Roughage took right to him, as though she wouldn't mind visiting houses around town as the repairman's pet. I like that kind of gentleness. And if I should die, leaving her behind, the repairman would make a good father figure/master.

The census lady also came by. Even though we only do the census every ten years and it's not up for another five years. But she's a conscientious person who thinks there's no reason not to take care of some homes early, since she knows we'll still be here in five years. Pretty good planning on her part. She reads the paper and will know if we die (or move, fat chance), so she could cross us off the list then. Otherwise, when the actual census rolls around, she can concentrate more diligently on the ones who are non-responsive and need extra prompting.

I was a little concerned, since they don't include dogs in the census, but the census lady spent some real quality time with Roughage, even letting her chew meditatively on the corners of her paperwork. She was watching, of course, to make sure she didn't chew into the print area. She kept petting her on the head as she chewed, and it had to be a combination of things, the chewing, salivating, petting, and soft voice, that put Roughage to sleep right there in mid-chew. Very nice.

The brush salesman is someone I don't see much anymore. The days of brush salesmen are passed. And this guy isn't even really the brush salesman, but the son of the guy we used to have. His dad, now passed on, left him the bag and samples and he just shows up once in a while to keep the old traditions alive. He took one of his softest brushes and lovingly passed it through Roughage's fur. That, along with a soothing salesman patter, very soft, she was asleep again, the brush passing rhythmically back and forth. About even put me to sleep!

The milkman is also a very gentle guy. But this particular day he was rushed, and add to that, that I hadn't called in my order, so he had the conundrum of "Do I leave the usual order?" or "Will I get in trouble if I don't bring some special thing that he might have wanted?" He worked it out by arriving late, around 10 a.m., knowing I'd be getting up, me and the new dog. He came in and absolutely fell in love with Roughage, wondering, "What could I give her?" Dogs aren't known to like milk products, but he had a few Milkbones in his pack, and she graciously received one from his hand.

So what about the misbehavior? It can't be from the many human interactions she's had, since they were all great. So I'm blaming myself. Playing with her too hard, play-growling as I do, hiding behind things on my hands and knees and surprising her, and throwing toys and letting her chase after them. She seems to love it but maybe it's too manic for an animal whose mind is not yet fully formed. I promise to do better!
Posted by dbkundalini at 1:16 PM