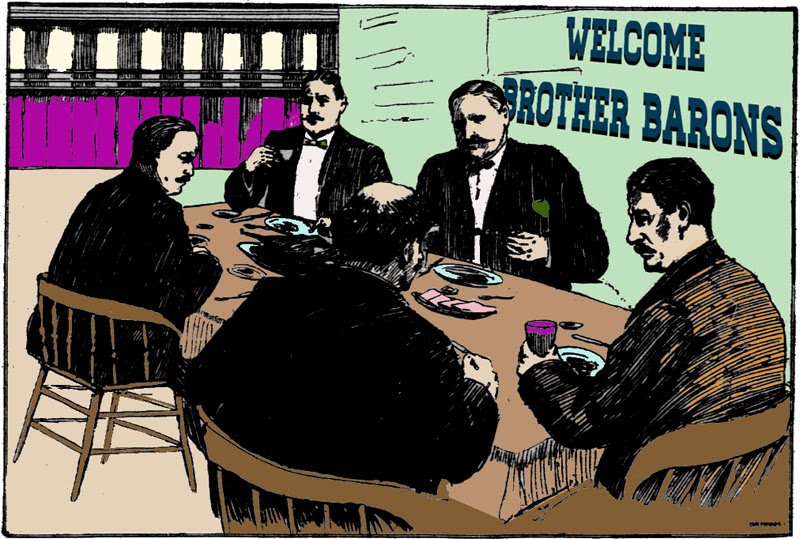 The beginning of February brought with it a meeting of the various barons of society. I was eager to get together, being consumed with the issue of February and its continuance as a month on the calendar. To which I am opposed.

Among the items on the agenda was the February Question, a hobby horse I often ride. Naturally, I came in for some good-natured ribbing, the Baron of Business saying, "What about Groundhog Day? The people need it to brighten their dreary lives, being, as they are, little more than boils on the backside of existence and, worse, knowing it." I pointed out, logically, that groundhogs would still exist without February, and sought the Baron of the Church's acquiescence to that point. He seemed to consider it an inscrutable question.

I was then surprised when each baron spoke against February.

The Baron of Banking said that a short month makes their bookwork more complicated, especially with the occasional Leap Year. "That one damned day every four years makes Y2K seem like a godsend." The Baron of the Church nodded in silent affirmation, and said, "The Lord likes balance and is put-off when it's missing. Plus the Church could use more Sundays in the year, not fewer. But with February, I don't know if there's two or three Sundays at the most. It's something to pray about."

The Baron of Business, always more brusque, took the side of the businessman. "Let the Church fend for itself. It has a Higher Power. We've got the bottom line. For us February cuts both ways. Yes, if we had more days to work with, we'd make more money, a huge plus. But factor in this, that if we don't meet our goals, February is our biggest excuse: 'We ran out of time.' See? We put the goods out and we open the doors, but we're not in charge of time itself!" I pointed out, rightly, that he should work more closely with the Baron of Politics.

The Baron of Politics, seizing my opening, cleared his throat and took the floor. "Baron," he said, addressing Business, "I do have the power over time, as in the principle of Daylight Savings Time. If you're willing to get up a few days earlier, I could make it January again right now, February be damned! We just need to work more closely together. You put your hand in mine." At this point Church shifted uneasily before admonishing, "No sir! Put your hand in the hand of the man who stilled the waters!" Politics, knowing he'd overstepped, smoothed troubled waters, saying through clenched teeth, "Point well taken."

The Baron of Industry, a man of action and few words, gave his opinion another way. He took his jacket off and flexed the bicep on his right arm. We watched amazed as a brief tattoo video showed raw materials being delivered to a factory. He shook his arm and the second video showed the factory manufacturing goods, all so harmonious. The final time he shook his arm it showed a fleet of trucks taking goods away for delivery. I interpreted his point for the group: "Destroying February, if that is our goal, is a step by step process."

Concluding then, as host, I gave the summation: "Gentle Barons -- Banking, Politics, Business, Industry, and Church, as the Baron of Blogging I am a man of letters. In my work, I must know the great rhetoric and logic, the prose and poetry, that have graced mankind's history. For example, of the five of us, none quotes Shakespeare more than I. Who said, "A rose by a totally different moniker would waft out a scent as pure and sweet." Proving one truth, "Yes, February is a month, the other months are months, but it is entirely inferior, yielding a noxious stench. Simply put, it must be destroyed here and now or this conference will have been a failure!"

The meeting went quiet and I was embarrassed. But the merciful Baron of the Church took the gavel from my limp hand and dismissed us to a time of coffee and sharing how our wives are doing. Since I'm unmarried I could only listen with interest and envy.
Posted by dbkundalini at 10:15 AM