Does This Picture Nauseate You? 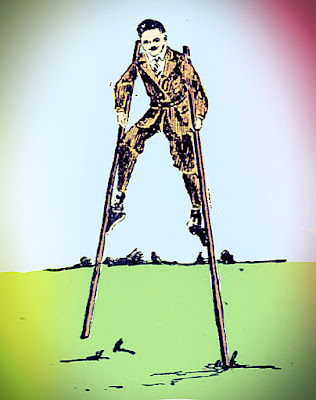 Like all the best blogs, almost everything I post is exhaustively tested for its appeal to the public. I spend a small fortune on focus groups, doing anything I can to present only the finest content, things I know people will like. That's part of the secret of my success; you don't attain the heights I have by leaving things to chance. Making what I do not just a creative effort, but a scientific achievement.

Most of my stuff sails through with flying colors, of course. So imagine my amazement when the reports came back on this stilts graphic! The focus groups experienced every queasy feeling there is, from nausea to outright vertigo. It was actually so dire the focus group center temporarily closed, their employees making any excuse to go home for a long weekend. If they had been kept at work, according to one lower level employee, they would've been restricted to very tame content for a few weeks at least, so as not to rankle them further. Not only that, but because of lost hours, now I've been fined, docked, and blacklisted for a couple weeks. So till I'm reinstated everything you see here will be raw, and I can't be held responsible for any of it being good.

So that's the report. They went from nausea to outright vertigo. Nausea, I've been nauseated, I know how it feels. Lots of things nauseate me. Waiting more than a minute for service in restaurants, reading Facebook posts about pets "Crossing the Rainbow Bridge," commercials for fast lawyers and anything involving insurance and the Statue of Liberty.

Anyway, the big problem with the graphic -- which is simply a man in the wilderness standing on stilts, and perhaps wobbling about, shaky, and about to fall -- so far entail these physical reactions. The focus group people say their groups were getting sick everywhere, with their reactions not limited to direct viewing, but persisting for hours after. Naturally, a person can only do so much of that, but the reports are that they've also had many severe dry heaves, followed by cold sweats, hot flashes, and the heeby jeebies.

I myself am a little sickened by it, perhaps. I had some of the manifestations reported, but I thought it was unrelated to the graphic. I've been listening to some of those brain wave videos on YouTube, most of which are marked "Dangerous" and "Beware," so I figured that was the root of my problems. Either way, I'm bold, charge right in, heeby jeebies or not. I've got my big boy panties on, and they're not in a bunch! That's true grit, which runs in my family, skipping a generation only now and then.

Please, dear reader, give the guy on stilts a chance! Why would something like that get on your nerves? Maybe because he looks very unstable, a fool in the wilderness about to tumble, probably head first. He's dizzy, so you're dizzy! To the point of nausea? Perhaps. If so, please look away, and try to forget it as soon as possible.
Posted by dbkundalini at 7:31 PM