There Shall Be Enemies 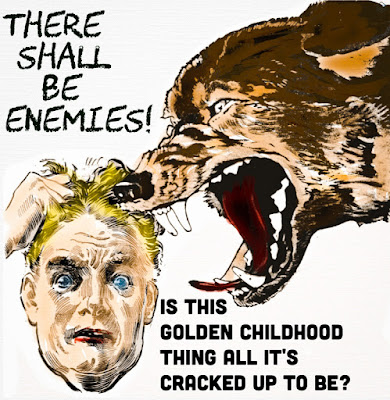 Since the time I was conscious of myself in the world I've known I was The Golden Child -- destiny gave me this standing through divine will (probably) and a mystic obstetrician (definitely) -- but that doesn't mean I've always been open about it. I never marched forth to fulfill the role for various reasons. One, the urge was never a great as it is right now; with aging, unfulfilled destiny is often seen in a "now or never" light. And, two, there's no "pass" given to The Golden Child; there are naturally the challenges everyone faces, but much worse.

Being or doing anything out of the ordinary in life can be fraught with peril. Your friends at school get word that you think you're something, your life ain't worth a plug nickel. I remember grade school; a few kids were literally assassinated on the playground, for no greater crime than acknowledging they'd done well on the quiz! Survival meant you failed out of ignorance or on purpose, or keeping your yap shut about passing. Adulthood is hardly better. You won five bucks on a scratch ticket? A jealous mob can arise in a flash. You won? No, you lost!  There's always enemies.

Without trying to put myself in esteemed company, and in light of the truth that "No good deed goes unpunished," there are famous examples in spiritual literature. Moses in the basket and Daniel in the Lion's Den. One was a basket case who couldn't stay away from Egypt and the other styled himself the mane man. As a result, both had fierce enemies. My dad taught me about the speckled bird (Jer. 12:9); "The birds round about are against her; come ye, assemble all the beasts of the field, come to devour." Needless to say, they didn't celebrate Speckled Pride Week in ancient Israel!

Right now, believe it or not, I'm typing this in public, in the library. But I don't want anyone to know. So I'm hunched over the keyboard, hoping there's no keyboard-whisperer type agents around, guys who can read from a distance what you're typing, or I may never get through this post! It's a paranoia I'm hoping to shake, but being out as The Golden Child is a new thing for me. I see huge danger coming thanks to this distinction. There will be enemies!

Of course it still might sound craZy with a capital Z to you. But ask yourself, Who's more likely to rock the boat of the entrenched, the corrupt, the powers that be, some flaky guy crossing his eyes and twiddling his thumbs, or a Golden Child from Who Knows Where? I'll guarantee you, if you're considering these things in the light of day, the Golden Child's a marked man forever.  So here I am, hunched over the keyboard, and probably even now betrayed by an aura or inner music or some other infernal thing that ought to be pure blessing to me.

Don't worry. I haven't talked myself out of being The Golden Child. This has been cathartic. Steeling my resolve. I shall make my stand as The Golden Child! Tomorrow! At the coffee group downtown!
Posted by dbkundalini at 5:36 PM