The Mysteries of Outer Space 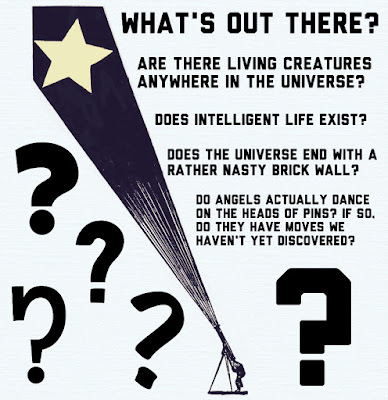 I watch a lot of space documentaries, a lot. Basically, if I see a space documentary listed, I turn it on immediately. For lots of reasons, of course, curiosity about what's "out there," about humanity's place in the universe, and even spiritual reasons. To me, there is no division between nature and us, which I think should go without saying, but we so often seem to make a differentiation between ourselves and everything else. The vastness of space is an awesome thing, and, in my opinion, makes any distinction between us and existence itself tenuous.

Ah, who am I kidding? It all has to do with my dog. The biggest reason I watch space documentaries is to give me something to think about when I take my dog out to do her business. We're out in the morning and I see whatever's left of the night, the morning star usually. She also goes out at night, and that's when it's really happening. On a clear night, such as recently, Venus is bright; the other night it was real close in the sky to the waxing moon. So I'm thinking, "You may be bright, but not bright enough for me to see her business." Yes, what I'm saying is my flashlight's brighter than Venus!

Of course Venus can't help it. It's far away, and my flashlight's right in my hand. You can't aim Venus. It's unidirectional, not fit to shed light on anything locally according to your will. It's just reflecting sunlight anyway, which if I want sunlight I can just wait till it's up and use it directly. The distinction is I can stare at Venus all I want, but I can't stare at the sun. You look at the sun long enough and you won't look at anything else! I don't recommend it...

In my own particular neighborhood, there's trees to the north, so I never get a good view of the North Star, the Big Dipper, the Little Dipper, and whatever else is up there. When I see these sights, it reminds me of Grandpa Slump, who, they say, used the stars to help him never get lost. Let's say he was maybe lost, all he had to do was wait till night, and having looked at the stars so long, he knew which way to go. Which obviously would work. If you find the Dippers and the North Star, I guess you just walk that general direction. If you want to go south you need a rear-view mirror.

Wouldn't it be great to learn a language from a civilization on another planet? If they have civilizations like us, that'd be hundreds of languages. I remember in church, back when we had missionaries come around and tell about their work, they were translating the Bible even these days into languages that didn't yet have it. If we landed on other planets, imagine the work missionaries would have! Of course up there they might not care about Abraham, Isaiah, and all the rest. Their loss, because the Bible's great. But they might have someone similar, and that'd be interesting to read too.

As I write this, it's about time to take the dog out. But I'm afraid that tonight it's likely to be cloudy. It's been a royal pain in the ass winter day, which will probably continue to screw up the sky tonight.
Posted by dbkundalini at 7:22 PM