Myra, My Dear, I Forgive You 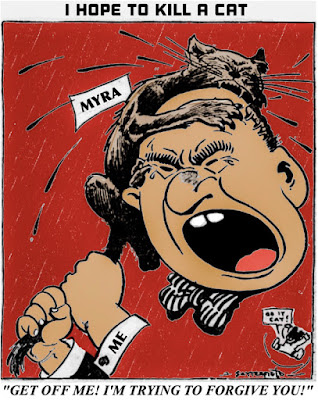 
OK, my first mistake might have been listening to the wise derelict, the cat guy, who in reply to my question, "What if I surprised Myra Kula Electra by simply forgiving her for our problems in the past, as well as her article calling me a 'Local Crank'?," said, and I quote, "I hope to kill a cat, that would be good."

Let me reread his statement, just to make sure I didn't miss any qualifiers, any warnings, any hint of possible disaster, however remote it might be. "I hope to kill a cat...." He said that several times, which seemed to be something of a nervous tick, maybe a phrase he picked up from his parents. I can picture an old immigrant getting off the ship, having tripped over many cats carrying verminous rats and mice, saying repeatedly, "I hope to kill a cat..." But there's nothing in the phrase that constitutes a warning. The rest of his answer "that would be good" seems at first blush to tell of a bright future, a positive outlook, and an expectation of results that could only be characterized as unambiguously good. No warnings.

So why in the world did it turn out that everything ended up in an unmitigated disaster? I trusted this old fraud -- some derelict he turned out to be! -- and now I curse the name and memory of him and his unhelpful father and the ship he came in on. I hope those verminous rats and mice that were such a focus of his ride to this country, to freedom, are even now feasting on his dead bones, or are with him in the afterlife, like in Egyptian religion, forever consuming that bad father's heart. "The sins of the father are visited" and all that, with a son who didn't fall very far from the old tree, to give me that kind of pathetic advice. I hope to kill a cat, indeed!

I called Myra and she hied her way to my home. I started in, pleasantly officious, "Myra, ever since the beginning of mankind there has been sin and sorrow. Ever since Ug killed Craythur, we as a race have been up to no good. It's both no fault of our own and entirely our fault, if you can accept, not a contradiction, but an existential dichotomy often missed in polite society for a certain unfamiliar subtlety. You're the kind of gal who'd probably prefer more the jackhammer approach to theology, since I recall how you preferred more the jackhammer approach to lovemaking when you bedded down in public with the four prisoners."

You gotta admit, that's a killer opening. I'd call it 3D understanding. Not only do I understand the ins and outs of the first sin, but I'm able to deftly apply its lessons to our immediate time, what Myra did -- with Tipsy, Spud, Cannibal, and Danny -- public sex, right there on the ground, during our city's observance of the July 4 holiday.

As heated up as she appeared, upon this preamble to my ultimate offering of forgiveness, I believed that the conviction of sin was already working its divine magic. So I continued, "I hope to kill a cat that you understand the gravity of your sin that night, and the deep rift it caused in our relationship. Not one of those prisoners was worth giving your all to, let alone all four. I was surprised that you were so willing to cheapen yourself in my presence, and allow my opinion of you at that time to sink to such a depth, that, frankly, I had absolutely no respect for you from that moment forward. I was repulsed, shaken to my core, and considered you lost." Rereading that part, maybe I was harsh; I had no claim to her. But didn't the cat-derelict see good things ahead for Myra and me working together? "I hope to kill a cat, she'd believe it," he averred.

So I was all set to offer my grace, if only she'd honor my offer. "Myra, I sincerely believe you are a good person at heart, a decent woman through and through, if you let yourself be, and, very importantly, if you face up to your faults. I will stand with you as you work through the trauma of your treatment of me; be encouraged, it wasn't easy for me either. And now, my dear, hear me out. You don't have to face it alone, you can face it knowing that I have wiped the slate clean, meaning, Myra, I forgive you for your sins against me. Yes, they were against me, but they were also against you and your best interests. Do you accept my forgiveness and vow to make a fresh start and become a better woman?"

Imagine my horror when she went into full meltdown mode, and spun there like a top, and with her voice set on Maximum Shrill, she proceeded to dress me down for my nerve of presumption; my misjudgment in every way; my own inability to accept that I'm not God's gift to man, woman, or even the common house roach; that my sanctimony is a hindrance to my appeal, which was low enough to begin with; and that I'm simply such an aggravating son of a bitch that I should be wiped off the face of the earth like snot off a two-year-old's lip! That hurt.

In her full malevolent eloquence -- and as I was otherwise mentally preoccupied with the terror of this complete dressing down -- I was able to perceive something about her 'not quite her.' There was something else going on. I felt a charge of light and energy skyrocket up my spine, as I recalled the old coal mound!
Posted by dbkundalini at 2:13 PM