The Mad Train Passengers of India 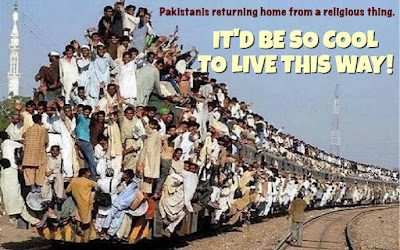 This might be India. If it's Pakistan, that'd just go to show I know next to nothing about Pakistan. I'm going to be writing as if it's India, and if it's Pakistan ... it doesn't matter. The message is the same.

Sometimes I think I was born in the wrong place, since I think it'd be very cool to live like crazy people, like they do in India. Certainly crazy according to our constant rules of propriety in America, where we're so bogged down by rules and fears, nothing like this would happen. The cops see five guys on a train here, they'd stop the thing and take them in. I don't know if I ever mentioned in on the blog, but I was on a train once and the cops had the whole train stopped and took me to the station. (They let me go, no charges.)

Just let 'em try to stop the train to take these people in. They're on a train like that, do they look like they care? Certainly there can't be a law against it. And if there is, that's the way to circumvent a nasty law, en masse, a law unto yourself! I think it's pretty clear that the rules are different, that the laws, if any, don't matter, and that the people themselves are extremely careless as to the consequences of what could happen.

Imagine that in America! Everything halfway dangerous is a no no. And if you're on a train, even inside a passenger train, if the thing goes around a corner and you fall on your butt in a suite, you've got a good lawsuit against the line. The people in this photo don't look like they're riding with a lawsuit in mind. They probably don't care at all. Their whole psyche's different from ours. They're not living with long boring longevity necessarily in mind. "I need a ride today, up I go, hanging on to something that's already crowded and dangerous. Get me home!"

I'm so reserved, though, I'd see this mess of humanity on the train, and I'd be embarrassed to step up and say "Make room for me." I hate to put anyone out. But obviously you've got to get in there and make your own kind of magic, a place to hang on to, and do your best. If you care!

This picture is not a rarity either. I seem to remember in Slumdog Millionaire a bunch of this. And I've seen documentaries about India, where it's mostly constant like this. The really weird thing about the picture is the apparent orderliness to the chaos. Which naturally is because everyone's clinging to something, like organisms attach themselves to the bottom of a ship and make a life with that environment. It's fascinating.

One of the other things I've seen about India, and you can find it on YouTube, is train surfing. Guys do this other places too, but the Indians look a lot more daring. Moving out, then moving in just in the nick of time to avoid running into a bridge or something. They're quite complacent about danger. Not the way that comes natural to me, of course, but I've lived with American ways all my life. Look at all the money we'd save if we could just glom on to any passing vehicle. Riding on tops of the trains, trucks, whatever.

Posted by dbkundalini at 7:57 PM