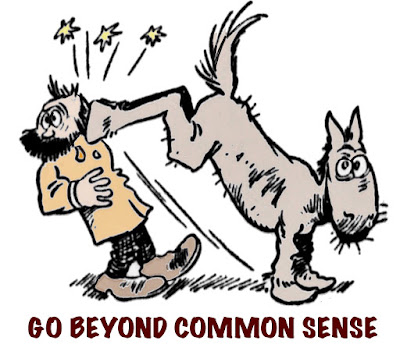 What is common sense but the lessons learned from common experiences? Everyone beyond a certain low level of awareness, a step up from the turnip, has it. It guides behavior in this, that, and the other situation. If, for example, it's a matter of paper-clipping pages together, common sense says the paperclip goes at one of the corners; it's not thrust through the center of the pages, then bent over. If you disagree, please consult one of the style manuals used in intro college courses, or look it up in any dictionary under "Duh."

Today, I'm thinking of what lies beyond common sense. Which, to be brief about it, is found in two directions: 1) Expertise in a subject (or generally), which comes through interest, discipline, and is laboriously pursued; 2) A terrible trauma, which can happen at any time and is dangerous. Of course, discipline and study build up a person. Trauma commonly makes a shambles of one. But rarely, anyway, there is a positive difference. Didn't Rudolph face trauma being excluded from reindeer games? But didn't he also save Christmas?*

I'm thinking of trauma of a different sort, which cannot be precisely described, since trauma can also immediately kill you. Look at my graphic. Study it reaaaaal good; it'll be on the exam. A guy is kicked in the head by an ass. There are stars, which indicate a nasty blow. His crossed eyes show a physical reaction, probably one of pain and confusion. At this point he isn't looking for the silver lining of the unfortunate incident. If he's thinking at all, it has to do with immediate assessments of what the afterlife entails.

Let's surmise, however, that with this trauma everything in his head was now in perfect alignment. Before, he was what? A dunce? Who else would stand that close to the ass of an ass? Now, however, he could a genius. Probably not, but would it be impossible that a brain that before was good for nothing might through a million and one unlikely internal coincidences now be an honest-to-goodness, certified, Einstein-like specimen? Anything's possible in fiction, just shooting the bull, speculating, "What if?"

I would never (not in a million years or more) wish any trauma on anyone. I myself actually had a head trauma a year ago, and it didn't do me a bit of good, nothing that's manifested itself yet. But if you ever do have a trauma -- anything from falling off the top of a Ferris wheel, all the way down to something more commonplace, like a paper-cut -- you might look for the possible hidden blessing. Are you now a genius? Have you suddenly acquired deep spiritual insight? Or, as you may prefer, but to me is actually an inferior result, are you simply the same simpleton as before? I myself have noticed no positives, only continuing memory loss, which may or may not be psychosomatic.

Note: The title "Going Beyond Common Sense" is only one possible outcome, and not the most likely. May none of your traumas be self-inflicted, only the result of genuine accidents!
Posted by dbkundalini at 7:06 PM