I Hope To Kill A Cat 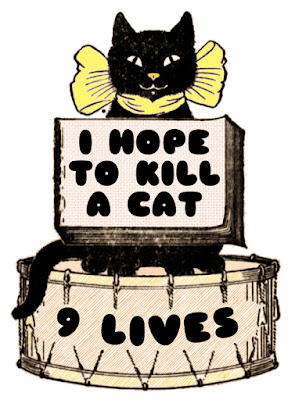 Unfortunately, being The Golden Child -- while a terrific rush most of the time -- doesn't make me immune to troubles. I've had so many problems, inconveniences, and headaches, of virtually every description, since yesterday. I sat still for about an hour, seeking my inner counsel, usually a very reliable service, open 24 hours a day with the best advice, tailored solely for me. But nothing happened!

Then it all hit me, the root of the problem and the solution. A karma kabammy has been put on me, as sure as I'm sitting here, by one of the saddest mamas I've ever been cursed to know, Myra Kula Electra! O! Doesn't that sicken you to hear? How often must I suffer her? I want to know! I didn't sign up for this!

Anyway, I just had to get out of the house. The walls were closing in on me, likely damaging the foundation. Thank God I've got good insurance, but I hate the inconvenience. I ran toward town, leaving a wake of wreckage behind, cars swerving in the ditch, damaging fence posts, releasing dogs from yards, and probably inconveniencing not only me but many others. At this point I had no alternative. It was stand-and-die on the spot, await the fate of a massive sinkhole, or keep running and hope no one connected millions of dollars in damages with the karma of The Golden Child.

The further I got from home, the more I could see it was only a localized kabammy. Obviously Myra didn't anticipate me diagnosing the situation and making a run for it before it was too late. The closer I got to town, everything was more normal. I knew where I was headed. There's an area just off downtown called the Skidrow area. It's nothing like a big city, just a mini version. A few bars and derelicts, nothing major enough to inspire pride, but still relatively cool. I've learned by hard experience, if you've got a kabammy going kablooey and karma's at the heart of it, there's no better counselor than a derelict; they're so far down it all looks up to them...

I saw my man. A gnarly looking guy, probably about my age, mid-'60s but looking so much older. I went over and sat by him, up against the building. He had a bottle in the bag. I reached for him to pass it to me but he refused. Which was a good sign. This is a man who knows his own mind! I explained the whole situation about Myra Kula Electra and asked if he understood the dilemma. "I hope to kill a cat, I do," he said. Fine, that's great.

The situation gained rich clarity by the moment. What a counselor, I thought. He needs to bottle it, at least write a book. This is Deepak Chopra territory, Eckhart Tolle gold, guys I like. He could write a book and buy this bar, then he could sit inside whenever he wanted.

I continued, "I've been thinking, What if I surprised Myra Kula Electra by simply forgiving her for our problems in the past, as well as her article calling me a 'Local Crank'?" "I hope to kill a cat, that would be good," the man assured me. I ventured on, cautiously, "She and I could work together -- two heads are better than one -- I'm the Golden Child with important work in the world, and she's very special, too, apparently; at least I suppose I could make her believe she is." I hope to kill a cat," he started, "She'd believe it."

It went on like that for a while -- clarifying many things for me, including his bad history with cats -- and I went home. Now all was clear! The kabammy had dissipated and I believed I knew how to handle one Myra Kula Electra!
Posted by dbkundalini at 2:40 PM