Lucent In The Sky With Demons 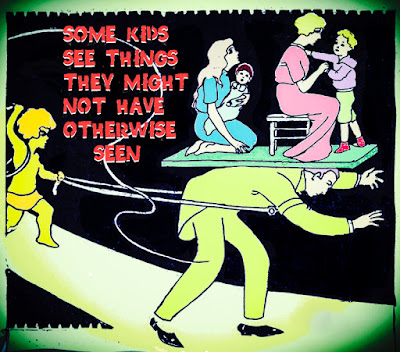 One man immediately believed my word that I was the Golden Child, my cousin Roto. I figured he would. We've been together over the years, especially as kids. "Yes," he said to me before the Coffee Club, "You are The Golden Child." As he declared this, others more readily fell in line, celebratory of the mission before us. So Roto tilled the soil for me, and now what a fantastic crop I hope shall come of this moment!

How well I remember the magical world Roto and I lived in as kids. Probably like all kids at play, when left to ourselves, we saw angels, devils, and various animal prodigies. I'll never forget one great Thanksgiving when we were about 10. Mom roasted us this gigantic firefly we'd caught, about the size of a 20-pound turkey. The thing was delicious, and the extra glow from his backside as the centerpiece made the holiday even more special.

Some of the coolest things we saw -- excluding fairies, gnomes, and trolls, everyday stuff -- was at this old mound of coal at his parents' place, my aunt and uncle. I'm still not sure why there was a mound of coal, but there always was, with soil that had blown in and green growth over it. My hand to heaven, we saw that mound become like a glistening mound of gold many times. Occasionally we beheld lights circling around the gold, with new age music emitted from somewhere, well before it was an official genre. We met with beings of lights so often we must've each worn out a dozen pair of sunglasses! Good times...

But the times weren't all good... Occasionally there was an enemy who'd rise up -- one with female qualities -- and terrify us. In psychoanalysis, I suppose she would be akin to an anima heart attack or a devouring mother figure. Like in Indian mythology, a mother who consumes her children. We usually ran away, but finally, having just smoked a homemade corn silk cigarette, I stood up to her with these words, "Whoa, back, Immortal Menace, thus far and no farther! Sheath thy fangs! And withdraw, for you have already eaten your children!"

You would've thought I'd touched her with an electric cattle prod, the way she reared back in terror and keen distress. She spun into the air like a souped-up comet; then in what can only be described as the overwhelming radiance of fire when it makes contact with piss and vinegar, she exploded across the night sky. If you look back in '60s history, that's the night many small planes went down across the country, obviously making it a sad time for their survivors.

We were kids. We didn't report our involvement. Anyway, who would've believed us? "Uhh, we were at the old coal mound, which belched forth hellish beings, including this one particularly menacing wraith. Piss and vinegar were involved, and that's all I know." On second thought, at least they would've had a lead. Instead, we were repeating to each other, in fear, "I didn't see anything, did you?" "No, I didn't see anything." We kept our silence until now, this very minute.