It's Me Again, Your Holiness 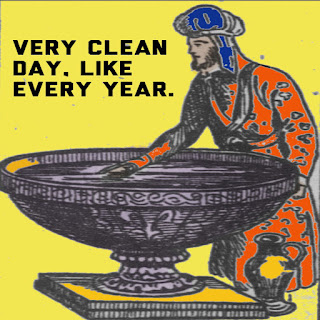 All things are holy to whomsoever they are holy. That's what January 1 meaneth to me, a wholly new chance to make a fresh start. I look at the calendar and I say, Yes, I can do it; that is what I shall do!

In that case, I resolve that, having neglected this blog for, lo, so many days and months in 2016 -- a wretched year in that regard -- January 1 of a different year shall be the time to let the past be the past, and old bygones forgotten (or n'er brought to mind). I shall once again be productive!

That doesn't mean everyday, of course. Life is full of surprises and many setbacks; you never know what's going to happen. Even lepers at one time were optimists. They were kneading their bread, feathering their nest, and giving it a go, until -- bam! -- leprosy. Now relegated to a pitiful existence outside the city gates, their family, themselves ritually cleansed, make arrangements with a cleaning service to remove all soiled things, bread, nest feathers, and whatever "go" they had going.

What a day, January 1! Reminds me how I used to get diaries for Christmas as a kid. Then how I'd write in them for a few days, until it was all forgotten. Other stuff got in the way -- school, play, sleeping, lack of interest. How depressing it was, then, to pick the thing up, say, on March 3, and try to continue after missing the first two months of the year! As far as I know, it can't be done. Nor, probably, should it be attempted.

That's the way I felt about 2016 -- somewhat -- except, as these things go, the Spirit hit me a few times, those blank dates, blank pages in the middle be damned! I'm going to write in a day or so about my posts of 2016. This will be in lieu of my usual year-in-review post. Since it's only a handful of posts, I'm going to treat them more as Spirit irruptions, similar to huge bubbles that rise out of a particularly nasty and very thick bog. You see them coming to the surface, pushing their way up, then the roundness of them rises, and in a few minutes they pop. The bog, being extremely viscous, doesn't allow ripples to approach the bank; it's just a dirty pop and it's over. Irruptions of the Spirit, yes, but more hidden than revelatory.

Did I not have ideas? Is that the problem? No, the ideas are always there, but fleeting. If I don't write them down, they're gone. If my computer's hidden amidst rubble in my room, which happens more often than I like, I can't get to it, and all is lost. I desire to flesh out the ideas, but the opportunity passes.

That's probably enough said for today. The picture represents me, dressed in one of my nicest ephods, working at my holy task. Wish me luck, wish me blessing. And if I see any luck or blessing, rest assured, you'll be the first to know.
Posted by dbkundalini at 1:36 PM