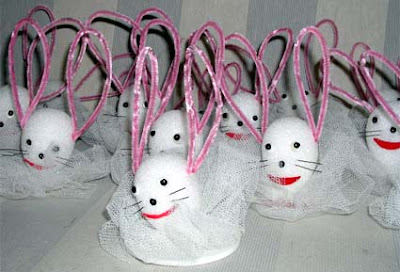 It hasn't been a terrible day at the shopping center selling my Easter bunnies. But I'm glad I didn't plow any more money into them than I did, since I've only sold just over 40 of them, meaning I have close to 60 left.

But still, I'm looking on the bright side. There were enough customers to buy just over 40 of them, with a few of those of course being the ones who bought two, cheating me out of the extra buck. Come on, people, I need you to buy them one at a time!

But there I go again, looking on the dim side instead of the bright. Seriously, it hasn't been a half bad day. It's just that I'd rather make more money instead of less, but everyone's looking for a bargain. I suppose I could put myself in their shoes and see that I'd probably do the same thing, regardless of what kind of suffering the guy behind the table might be going through. I put on a brave face.

In some of the slow time I've talked things over with some of the other crafters. When you see them cross their arms and frown you know it's a good time to talk. Because they've always got a gripe on their mind that they're just dying to share. So I heard some of that. They're like me, very paranoid about people sneaking in a camera to take pictures of the crafts; that's why I don't have any pictures from the actual sale, because they'd string me up. We don't want people copying our crafts, whether from a photograph, a sketch, a photographic memory, or from buying one and disassembling it. The last one there is very hard to prevent, as you can imagine.

Crafters are among the world's unhappiest people, and it's not just the paranoia. It seems like there's always an issue about the size of the crowd and whether the advertising was sufficient. If there's anything else happening in town, whether it's a citywide celebration or a bake sale at the church, it's invariably blamed for the poor attendance. We always see the problem out there somewhere, never that people might just be fed up with crafts and surly crafters. I don't say that to them!

Then when we do get customers, we're complaining about how tight they are with their money and how the economy is always against us. I guess the complaints I hear are endless, that people can't keep their kids under control, they're playing with the merchandise, and maybe breaking something. And one of the biggest is one that's been the talk of the day -- this day -- that the shopping center has relegated us down one side hall, where people barely go and where you can barely see us. Most of the people who go down that way are on their way to the bathroom, so they rush by and aren't there to buy.

After lunch it just totally died. That's why I have time to write this. But whether I can get it sent or not is a good question. I'm using the unsecured wireless server from the Mode O'Day store and since we're clear down this hall I'm not getting a good connection. It's going out all the time.

I'm going to 'Publish Post' and see if it takes it. Yes, there it goes. Success.
Posted by dbkundalini at 2:04 PM