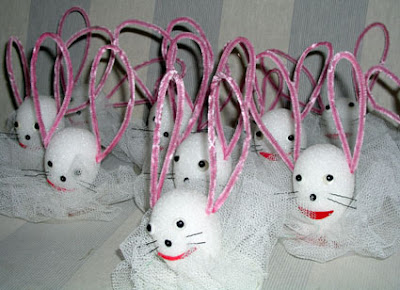 Greetings from the Shopping Center Easter Craft Show, where I've got my Styrofoam bunnies for sale for the fourth or fifth year in a row. I'm got an 8-foot folding table, like usual, and I'm looking for big profits.

Unfortunately, the bunnies aren't moving like they did the first year or the second. There's been a drop-off in people's interest, but I decided to keep them for at least another year. I had over 50 left over from last year, out of 100 total, so that's a lot of inventory to just eat.

Still, I kept thinking about making something else, starting in about February it was constantly on my mind. But I sort of had a mental block, all I could think of was something like bunny tales on walnuts, for whatever reason.

By now, though, and a few people pointed it out to me today, I'm known as "the pipe-cleaner bunny guy." It's nice to be known for something, and I had to smile when they recognized me. So I might have to keep doing it. Little do they know, I've been tempted to burn the damned things, since they're in the closet all year wasting space. But I just say, "Oh, yes!"

As far as the craft sale goes -- and we're about halfway through -- we're seeing the same old problems. And that's true across the board, they say. Craft sales aren't what they used to be. People are jaded these days and they've had it up to here with cutesy stuff. It comes out of the general truth that we're a polarized people, losing touch with the old traditions, which, frankly, are supposed to comfort us, but instead we're revolted.

I try to put the sociological thoughts out of my mind and grin like everyone else. The other crafters do a lot of scowling when no one's at their table, then a lot of grinning when "fresh meat" comes by. It'd be fun to get some pictures of it because it's just like night and day. There's no one quite as forlorn and pessimistic as crafters. They're basically only happy, or seemingly so, when they see each other on the circuit. It gives them someone to grouse with who totally identifies. (These guys go to sale after sale but I only go to this one local sale.)

I saw this one big guy in bib overalls I always see -- fresh off the farm with his wooden goods. If it's wood, he sells it, little benches, shelves, paper towel holders, etc. You can spot his stuff a mile away, because he always has these rounded hearts on the ends of everything and nothing's painted. And I saw others I recognized, ladies selling handbags, jewelry, etc., and a new one this year, some guy who cuts LP covers apart and makes spiral notebooks, with the front and back covers. They're $13. It's sad to me to think of an idiot laying waste to all these albums.

Our setting this year is bad, even worse this year too. Once again the shopping center has us down at the far end, but now with several newly empty stores around. Most people who come down here are headed for the bathroom and that's it. I've been watching them and noting the ones who -- thanks to the short timing -- couldn't possibly have washed their hands afterward.

(I just had some people come by and look at the bunnies, so I had to quit typing and stand up and grin. They obviously didn't want to make eye contact with me, which is always the first clue they're not going to buy anything. I tried to prompt them by saying, "Nice weather we're having," but the woman just kind of grunted something and went on. Our customers can be such garbage, note I said can be, because some of them -- the buyers -- are great folks.)

And it's not like I'm asking an arm and a leg for the bunnies. I didn't raise the price from last year, even though the cost of living has completely gone up. So I'm losing money just by setting up. They're still $5 per bunny or 2 for $9. I have to give a deal like the twofer thing even though I'm losing money hand over fist if someone takes advantage of it. The materials cost me full price -- they're not giving me a price break if I say I'm making two!

Pardon me, when I started typing I said I wasn't going to grouse. But it's contagious. It's all I hear around me, when we're not standing and grinning and asking about the weather. The table price went up, the price of gas is through the roof, the economy's crap, people are out of work, and of course they won't waste money on crafts if their families are going hungry. But why aren't they thinking of us? We have to eat, too...

It's frustrating, and I may as well take off the gloves and say so. I think of the bunnies as being kid friendly, made to appeal to the spirit of youth. But what do you get? The kids have the same jaded attitudes the parents have, and worse, because they go to school. If you go to school, your jadedness is multiplied because of your contact with other kids. Imagine what that does for my bottom line.

They're walking by with iPods and handheld games, iPads, ham radio sets, remote controlled cars, etc., and they're loving their little luxuries. It seems like pipe-cleaner bunnies are just no longer good enough for them. I see them yawning, with Mom looking discouraged and saying, "C'mon!" So they mess up my table and don't buy anything. I'd like to give them one of those Italian arm curses, hit your hand on the inside of your elbow and raise your arm quick. But I just roll my eyes at the guy at the next table.

Of course we crafters are all still paranoid about people with cameras, sketch artists, and people with photographic memories. Because the last thing we want is competition. These are our own designs, intellectual property, and I for one don't want to see a table of knockoffs next year. You can probably guess, cameras are the worst danger, because you get an exact picture of the item. And there's cameras everywhere, built into phones. Most people are carrying several cameras at all times. I need a sticker that when you buy these they're for your own personal enjoyment, not to duplicate and sell.

My sales -- you can tell by my poor attitude -- are very low this year. I think I've sold maybe 12, somewhere between 12 and 16. Several of those were at the $9 price, so I lost several dollars right off the bat, which can't be helped if I want to sell anything.
Posted by dbkundalini at 1:15 PM