Easter Bunnies -- Is This The End Of Crafts? 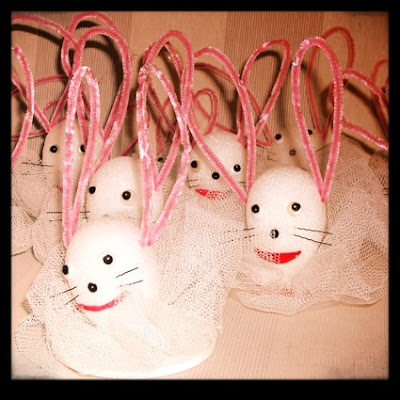 Well, I have to confess, I'm not in a very good mood. You can probably guess why: Easter's coming! Meaning, yes, even though Easter is a very joyous holiday, it's also the season for the Easter craft sale at the shopping center. Which once again I'm planning to set up for. Even though at this point I'm more depressed about it than ever.

Still, I keep telling myself, anything I make is more than I have now. But it definitely could be better. It's almost not worth it. And yet ... there I'll be.

When it comes to crafting, I think crafting's in a sad/weird state. It's not the best of times, it's the worst. One, you've got the old-timers, dinosaurs like me, who insist on only the finest craftsmanship, being heavily into the tradition of the thing. Only, we don't get much for it. Then you've got all the young turks, mostly women who are learning their "craft" off the internet -- as I call them, Pinterest copycats, churning out crap and that by imitation.

I'm proud to say I came up with my bunnies on my own. It took a lot of tinkering. But what's that count for these days? That and a quarter and I'm as good as broke. So, in part, I'm going to be there for my fellow old-timers. We have to stick together, even if it's hard; I see a lot of very grim expressions. But the others, the newbies, they've made it a social media thing for themselves, so they're always bubbling over with a silly excitement, la de dah. Crafting fangirls, big fans of each other, and not an original idea in the whole pack!

Even though I'm sticking with it, I have an incredible insight: No one really needs crafts. It's all do-it-yourself now. With the internet -- and the worst scourge, cameras everywhere -- anyone can knockoff your crafts. Like my bunnies. If you have a picture of them, and aren't just going by memory, it's not too tough to see what fits where. Although, insisting on craftsmanship and tradition as I do, of course they aren't going to be near as good. But I'm realistic; we're not making a living at it. Those who try, we have a word for them, the poor.

I mentioned cameras. What a scourge. They're everywhere. I wish it was the 1800's, like with Lincoln, where they had to ignite a living vulture on a pole for the flash and make a 30 second exposure. It wouldn't be hard to catch people taking pictures then! Now they're on the sly. Every phone is a camera. There's probably cameras built into wedding rings. It's a Dick Tracy world, only not as full of promise as we once expected, more a curse.

Really, it's like this: If you want to keep your ideas to yourself, you about have to cover them with a sheet and only offer peeks to people who express a real interest in buying. I think it might be good for them to put down a small deposit -- let's say $25 to $50 -- to take a peek. Then if they buy, they get the deposit back. That'd cut down on the frivolous browsers as well as those with a hidden camera or photographic memory. Or maybe put them to public shame if they didn't buy something, like dunking their head in molasses and spraying sawdust on them, or at the very least putting a big "Kick Me" sign around their neck. That'd cut down on idea-stealing.

On the other hand, if this is the end of crafts, it could be a big year. If people think the end is here, maybe they'll want it to go out with a bang. They might snap up my stuff like collector's items, the last hurrah of a dying era. I'd like to say tradition and craftsmanship wins out, but I don't think it does. Not when you have all these women and the fast thrills of social media, all of them getting together to celebrate one another's supposed cleverness (yeah, we know!), then it no doubt degenerates into touching, heavy breathing, impassioned stripping, and who knows what all, as they writhe in ecstasy on the floor. I hope they choke on it...
------------------------------------------

2012:
I'm Selling Easter Bunnies at the Craft Sale
Posted by dbkundalini at 9:01 PM