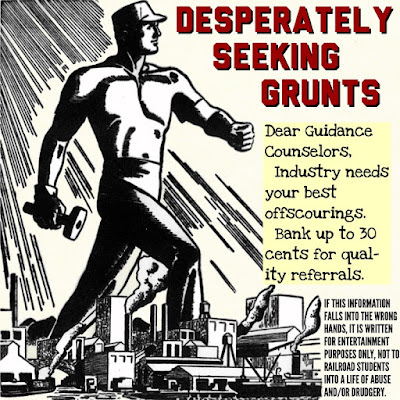 What are the motives of guidance counselors? This is one of the unanswered mysteries that has never been definitely answered. The surface explanation, of course, has to do with supposed guidance and counseling. A student, let’s say, needs counseling about his or her path. What will I be? How do I get there? The guidance counselor is there, at least superficially informed about those issues and at his best faithfully tending to students’ needs.

I wondered what I would be too. I thought about the future. But in all the weeks I was with the guidance counselor, sitting in his office literally with him right there present with me, I can't remember him once asking me any such questions or wondering what I’d need to do to get there. Instead, he was more often sour, like he resented the fact that I was there, and acted like it was ridiculous for a kid should've been wrestling to be sitting in the office with him. Wish I hadn't been so innocent and nice, I could've jabbed him. "You served our country fighting the Koreans (and by extension Chinese and Russian Communists) and you can't handle the weekly visitation of one meek boy?"

Why was I there? In case you missed one of the other parts, I had a series of seizures, just a few, and my mother thought the semester of wrestling would equal the onset of more. And I can see that, if I were thrown about the room, and bearing the pressure of other boys on top of me, or holding my legs up in the air as they pinned me hard to the mat below. Why it had to be the guidance counselor to babysit me, that's something I can’t remember at all, school choice. He was probably the only guy with few actual duties. What’s a guidance counselor do all day? Not counseling kids much while they’re in school, because they’re already in classes. I guess the basic purpose of a guidance counselor is to have someone step in for the wrestling coach when and if the wrestling coach is ever disgraced by his lust for the ladies.

I really hate thinking of myself as a guy the guidance counselor resented. Spectacular little old me? But he made it clear enough in his funky little asides and look of disdain that it was so. With a little more maturity I really could’ve entertained him, or kept his spirits up. If I’d known about the internet in the future and blogs, I might’ve told him, “Sometime in the distant future I will be writing a series about you. This won’t be posted in the newspaper or on bathroom walls, but will be visible and available to the entire world. But I won't use your name, because your name should be forgotten.”

It’s one of my big regrets that I wasn’t able to flummox the guidance counselor a little bit more. To get on his nerves. To really take him on not so much personally but on a professional level. By asking the obvious questions (obvious now, not then), What are guidance counselors for?

I’m afraid the answer might not be as high flown as we’ve all come to expect. But instead is something like this, to sift out the undesirables from the desirables. The haves and the have-nots. Those destined to be the grunts of industry, dispensable in every way, and quick to be forgotten when they’re ground under foot. What if guidance counselors were becoming hugely wealthy by selling students into industry for 30 cents per kid? I can see it becoming so mainstream very few people would even notice. Look at the things we get used to in politics. These days if someone broke the Bill of Rights out of its hermetically sealed case and wiped their ass on it, we’re so jaded we’d be saying “Would you like a hot towel with that?” They’d say yes and we’d be heating up Betsy Ross’s dirty old antique flag.

Well, buster, I’m no grunt... I’m here from the future to put you under arrest, and to take you with me back to the future to stand trial for your crimes and the crimes of your profession. Who do you work for? What are their plans for the future. Skip that last question; I’ll look it up on the WWW when I get back. And when you and I get to the future, the first thing we’ll do is Google your death to make sure we get you back in time for it. Don’t look at me like that. I’m not crazy. That’s how we talk someday.
Posted by dbkundalini at 6:37 AM