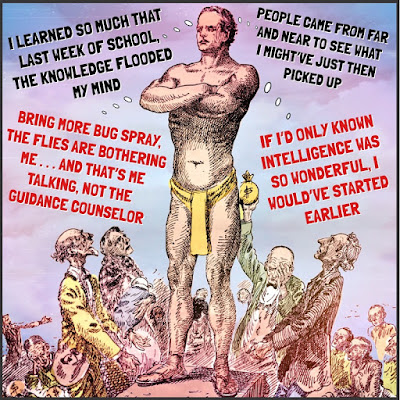 At this point in my life I suddenly knew how the Statue of Liberty feels, not just once in a while but everyday of her fascinating life, similar to Martin Luther, “Here I stand, I can do no other.” Which was an incredible insight for Luther, because when he lived the Statue of Liberty was still nothing but a gigantic French puzzle. People dreamt of it, “Will this thing ever be pieced together and floated to America on barges?”

When you put it that way, I guess I shouldn't have worried so much about the guidance counselor and my life. It sounds like things were fairly well, or most definitely, set in stone, foreordained, and going to happen more or less as much as any other alternative. Heavy stuff, I know, but my super brain, fit only for a Colossus, or split in pieces and shared by several brainless men, can think such things (1) and recognize them when they eventually come to pass (2).

The guidance counselor, then, knowing the school year was ending and that he'd soon be rid of me, was in helpful mode. “What can we do to cobble together a reasonable cover story for your educational pursuit thus far, resembling as it does the Wild Mouse ride at the carnival, a rip roaring scary ride, fraught with bumps and bruises, but in the end still on track?” I thought, “Now you’re talking my language. The end is set from the beginning, but just getting there is half the fun.”

“Something like that,” he deadpanned in his usual sour tone. As much as saying, “What do you know?” With a side of “I’m also guidance counselor for the best and brightest of this school. Let me get you on track, Mouse, so I’ll be able to deny whatever bad eventually happens.” A real Judas Iscariot moment if you ask in hindsight. But it’s true, life is about sinking or swimming. Dying in the embers or rising from the ash heap and taking your place. Does anyone really doubt that a guy like me — with loving parents — would rise to take my place with the immortals? Hearing none, the motion's carried.

Just looking at my Colossus pose is enough to put me on top of the world, even today, so long after the events of the past, fraught yet with bad memories, but with the evidence of whatever wrongdoing was done either long forgotten, lost, or being eaten by mice in the educational headquarters and their hidden files. The beauty of the whole thing now is, despite the guidance counselor’s many fevered insults about me, none of it matters anymore.

Plus, I could go to a hypnotist right now and still be put in a trance and forever be centered on the image of me as the Great Colossus, striding over a dominion vast in scale. This Colossus wouldn’t be a bit funny. Not a bit, for in my mind, with the hypnotist’s help, I would stride around the city knowing, certain that I am the champion of the world! Be nice to me or that could happen.

It really gave me a funny feeling to think, “Here I am, every bit as good as the guidance counselor, and destined to surpass him in every way. And I guess I have in certain ways. I’m still alive and he’s dead. And I know where his cremains are buried. And I’m not yet cremains myself, but like I mentioned before, I’m still alive. Not to rub it in too deeply, alive unlike him, who is dead.

But he was alive that day -- damn the luck -- and that’s what always matters about the past.
Posted by dbkundalini at 6:30 AM