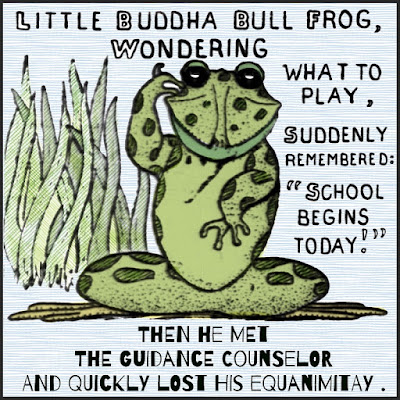 What’s this? Something about Buddha Bull Frog losing his equanimity, or alternately, his equanimitay. The spell check does accept that, but it rhymes in the full scheme of things, so TAY it is!

Yes, afraid so... That’s where the mind drifts today. I’m doing multiple no-nos therapeutically speaking, although of course it depends on who you ask on the nature of your therapy. I see the wisdom in various traditions, the spill-it-out school, wallowing in your trauma, getting it off your chest, spilling the beans. And I see the wisdom in putting it behind you, accepting a more nurturing path and outlook, not making hay out of your misery, looking on the bright side, etc. 'Torn between two lovers, feeling like a fool...' And the wisdom of just being.

And I'd say all that's well and good. I can swing multiple ways when it comes to trauma. And see multiple viewpoints. One, I am more than my trauma. My identity is not my trauma. Have you noticed all the years I’ve been here without mentioning the guidance counselor? I may have mentioned him in passing; I can’t remember, I’ll look it up later if I think of it. I have mentioned him in passing with people in real life, but have always found that no one really cares. That’s not a complaint, just a fact of life.

Do I care about the traumas of others? I actually do, but I don’t want to talk about them forever either. If we got together, though, and you had a particular trauma, I would be reflective on it, non-judgmental toward you, and encouraging about your future. Once it was out, though, and you were on your way, I’d be on my way too, with equanimity. That was a person I was able to respect and listen to, now for a hot fudge sundae!

Actually my trauma here is getting sickening even for me, since it’s all long past, and compared with other people’s traumas, seems almost illegitimate. No one touched me, no one cornered me. I had a guidance counselor whose attitude was somewhat askew from what I thought it should have been. At the time I didn’t tell anyone, because who knows, maybe that’s normal for a guidance counselor from a kid’s perspective.

So now, seeing the past by hindsight, am I Buddha Bull Frog? Normally, somewhat, yes I am. But in laying the facts out here, wondering why I am what I am, wondering how things worked out as they did, I have to think there are positives and negatives in the influences I had along the way. Like nice, kind aunts and an evil guidance counselor. Just leave out wrestling coaches, since I mercifully avoided that fate, thanks to my seizures and mother. But I saw the wrestling coach several times and the idea that I could've gone for him: “No, thanks!”

Buddha Bull frog or not, I definitely caught a few breaks along the way, which at the time might’ve seemed like the wrong path. Getting out of wrestling was great, going to the guidance counselor seemed bad, but having equanimity has to be in spite of the good and in spite of the bad. Life just happens. Take the good with the bad. Unless the bad is definitely actionable, then take the bastards for all you can get!

Buddha Bullfrog is unborn and marvelously illuminating, over and out.
Posted by dbkundalini at 6:18 AM