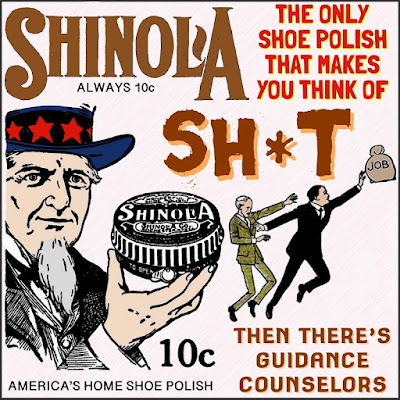 I'm a firm believer in the sense we have these days that everyone is a person of value and worth. And that all the jobs people have, if it’s honest labor and accompanied with a certain amount of dignity, it’s good. I know that's an over-generalization and that anyone can think of exceptions — beyond the obvious exception, guidance counselors — but it’s not my place today to run the gamut of possibilities, just to express in general the way life works.

Are there good guidance counselors? I believe there must be. We look out on a dark night at the stars. And we have no real sense of how far away they are because the distances are impossible to fully embrace. I see a lot of videos these days on outer space and the distances from earth to even the next galaxy over (with there being millions of other galaxies) and it’d take you tens of thousands of years, were even possible, to get to the next galaxy. So, yes, in an existence where the seemingly impossible is possible, it's more than likely that good guidance counselors exist.

Sounds like heresy, I know, from someone who’s spent his post-high school life railing incessantly against them. But look back at the record and you will not find me categorically saying every guidance counselor is evil, worthless, etc. Because in my heart of hearts I am a definite optimist. I see the impossibility of space travel to distant galaxies and say, “It could be done were it possible.” See the optimism? The fact that it is impossible with current technology, and my current level of ignorance, off the charts, puts me among the skeptics. But never say never, unless you’re saying never say never.

One thing I know for sure, my guidance counselor wasn’t good to me. You tell me the chances of me as an old adult still dealing with the bad memories of a guidance counselor. I'm virtually a dead weed -- I envy crabgrass --  but I'm still going at it. And that dirt-bag still occupies a very dark place near my roots, my psyche, a place entirely off limits to everything and everyone except the bitterest foes from hell. And even with demons I expect a certain level of decency and accountability.

I would love to open the records and air my grievances on some grand stage, where of course I would be dealt with fairly and not just as a guy with sour grapes. But I’m afraid my case would never be dealt with fairly. Instead, they would likely to take the guidance counselor’s side every time, and even though they said they wouldn’t deal with me as a guy with sour grapes, that’s exactly how it’d work out. Or it'd be like this, smoothing the edges; the guidance counselor was misunderstood, his ways were inscrutable but always meant for good. Don't go there...

Next, they’d bring in the grandchildren of the guidance counselor who would say he was a quality person right up to his demise. And that his saintly last words were a survey of his righteousness and a plea that, “If there’s anyone I’ve ever wronged in my godly life — and there’s absolutely not — that I be absolved of all that now and forever — blogs to the contrary be damned.”
Posted by dbkundalini at 6:18 AM