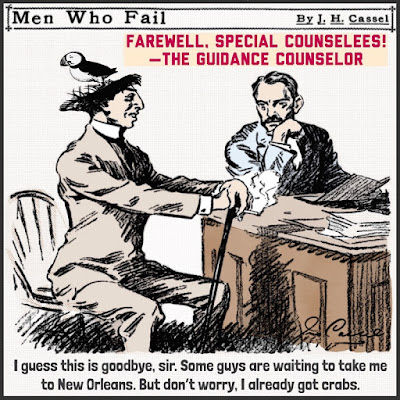 The end of the school year came and as it turned out was anticlimactic. Especially looking in hindsight. Everyone had to deal with end of the year issues, getting your hats ordered for graduation, etc. Then there was the whole deal with the locker, which I should’ve never had to deal with. If there's a problem, call the insurance guy.

We always have the world we have, though, and that was how it was back then. There was a definite ending point in view. And everything from that point is your place in the world as they foresaw it, or different, and making do, getting by, trying, striving, failing, trying again, relationships, having children, starting blogs, learning about computers, life insurance, burying your parents, scattering their ashes to the four winds, and looking forward, most of all, when you learn later in life that the guidance counselor eventually met his fate. With his cremains out there somewhere. I never sought them, and probably this close to my own death -- cough cough -- I’ll just wait to see his spirit in the great beyond. And go toe to toe.

But he had nice words for me as we parted, looking to make my life easier, “Don’t call, don’t write.” It’s true, it’s saved me a fortune on dimes and stamps. Which I know I could’ve done the responsible thing, given the dimes to the March of Dimes and the stamps to soldiers to write home with. But I banked the whole thing, keeping what was my own for my own purposes.

When I walked the stage to get my diploma, family over here was proud of me. They let out a cry of happiness that evaporated immediately. The other kids who’d been in the guidance counselor’s office were proud. A few of them didn’t make it, so weren’t present, so I don’t know if they were proud or not. Since they were likely hanging out on Skidrow, it’s not like we were going to see each other very often. Have I ever dreamed of being on Skidrow? That’s as far as it goes, I’ve imagined it without really ending up there.

The other big memory at graduation was seeing the guidance counselor among the rest of the faculty. There were the teachers I liked, the teachers I disliked, the school secretary whose deft handling of my money and the giving of my weekly lunch ticket is eternally impressive, a few hangers-on, like teachers from junior high, including the bastard who nailed me for nude magazine pictures in 9th grade, and of course the guidance counselor.

I never saw him again and if I ever did it would’ve been too soon. 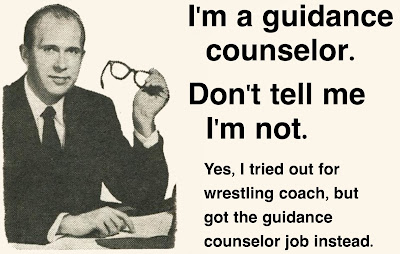 Posted by dbkundalini at 6:21 AM