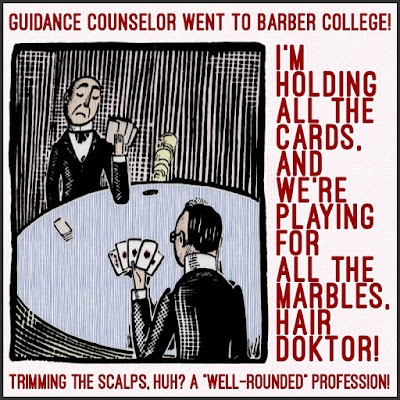 Well, well, Hair Doktor, prepare your scalp for the royal trim. Would you like that clipped free-form or do you prefer a bowl? Think it over. A bowl could be better, seeing I’m just a kid with very little grasp on abilities. Certainly the future’s nothing set in stone at this point.

And you are the guidance counselor, are you not? And you took it upon yourself to criticize so rashly my choices in life, even at this tender age, as not being guided by the deeper channels of wisdom, planning, regard for particular classes, and even participation in wrestling against the wishes of my mother and presumably my doctor.

No, no, no! You set yourself up the arbiter of students’ futures, actual living human beings with hopes and dreams of their own, not looking (at least in their sometimes immature dreams) to do anything definite, which you then warned would be grunt labor or another cog in the machine. It's great that you were so bold and that your wisdom ran so deep, when being guidance counselor wasn’t even your first choice.

Of course you got out of the military. I don’t know if you were drafted, but it seems entirely possible that once in you might’ve considered staying and taking the path a lot of guys dream of, retiring in 20 years. That sounds cushy, retire under 40 and sit around with a fishing pole and keg of beer.

But you looked around at your fellow servicemen and something about them made you say no. Always thinking: What is something on these guys that grows apace everyday and doesn’t involve sex? Hmm. Of course it’s hair, that fine substance that sprouts from heads, short and bristly at first, then limber and beautifully pliable with length. Sure, there’s dandruff to deal with, but that’s just dry scalp, could happen to anyone. Rub a little tonic on the average head and it's good as new. And the head is a miracle field needing a constant harvest, no planting needed. A haircut every month for its natural span of life! Or until it goes bald...

So why not be a barber? There doesn’t seem to be anything wrong with it. You can use your stories of near misses with Korean guerrillas to hold off the quick criticisms of guys whose hair was clipped too short or left too long. There must be a war injury you can toss in. They’re trying to tell you the cut's too short but the blasts are still ringing in your ears and you missed their exact wishes.

I’m not sure what the rest of your thought process was, but I have my guesses. You kicked it around in your mind, a barber career, but decided to do something else, going through college on the public dime and thought you’d be a wrestling coach. For the ladies. Then since there was already a wrestling coach, how about guidance counselor! No one else wants it.

My beef isn't what your career was, but the fact that it took shifting decisions and varying paths to get there. Which looks to me the very definition of not knowing what you wanted to be before you got there. Which then looks like the indecisiveness you criticized me for when I didn’t know precisely what my future would be under your “guidance” and “counseling.” “Guidance,” is that another word for dirty looks? “Counseling,” is that another word for hopelessness?

I just want to sit here a minute and think it over. 1) You in the service; 2) Then dabbling in the barber biz; 3) Then the wrestling job; 4) Then out of desperation, guidance counselor. Guess I have it right.
Posted by dbkundalini at 6:29 AM