What Guidance Counselors Die Of 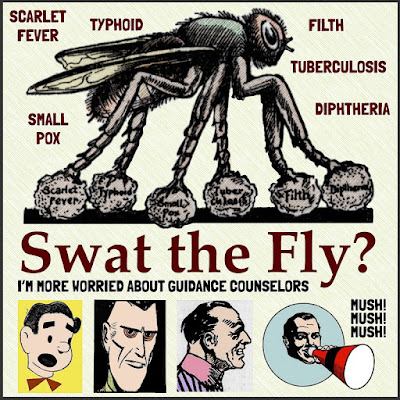 At this point, it has to be clear, whether or not you understand its nature, severity, etc., that something awful happened to me with a guidance counselor.

Yes, I'm a broken man. Wrung out like a sponge. Barely a drop to my name. Soon to seize up -- that'd be the ultimate ending -- eyes as big as saucers, mouthing but unable to utter my last vain complaint: "What ... happened ... to ... my ... life?" Nothing comes out clearly, but I motion to my neck, which everyone at first takes as senseless muscle/nerve activity, involuntary motions. But, no, there's a purpose. They find a locket and open it, never for a moment expecting Super Fly to launch himself into the air and fly off who knows where! Super Fly will destroy the world! Then they look to the locket one last time for a clue to this terror: It's a picture of a man, of the sons of men! Hands out as if in a wrestling pose! And a strange expression on his face as if to say, I'm here to do guidance counseling!

Hope that clarifies things. The guidance counselor caused me endless suffering, all because of a few seizures and me being excused from a semester of wrestling. Doesn't seem like much of an offense at this point, decades later. But at the time, you would’ve thought I was the one standing in the way of some great cause or hope. I don’t know what it could’ve been; the cure of cancer comes to mind. Or other dread diseases -- Dog breath and Italian breath present themselves --  that have given the world such tragedy and sadness.

My own thoughts on tragedies and diseases is, I hope they don’t get me. I’ve been in pretty good health since those days. No more seizures, which proves the wisdom of me skipping that semester of wrestling. Since then I’ve had the usual sickness, the flu a time or two. I’ve cut myself on nails or whatever, nothing too bad, and I’ve survived nicely. All the while, the guidance counselor, who was quite a bit older, himself did die. That’s true, he’s gone. So what’s that prove? He was older than me and was likely to die first? Or that his unrighteousness did him in? I can’t prove either one, so I'll just go with the one that has me at the center of the trouble. But my hands are up! It's not my fault, it's his!

Who knows what exactly did him in, heart attack, cancer, rickets, juvenile diabetes, plain cussedness, lymphoma, or something easier to spell, but it was something. I walk through cemeteries every once in a while and usually they don’t say what they died off. But we can guess, Whatever it was, it was something. So something’s what did the guidance counselor in, related to me or not. He might’ve died of a broken heart. Say everyone else took wrestling after me and no one stirred his enmity a second time, he might’ve just died of disappointment.

It’s true there are lots of terrible diseases that I wouldn’t want to have. But am I all for stamping them out? Not really, because 1) Doctors need to make a living, too; 2) We need a full slate of things to die from so everyone’s not dying of the same boring stuff. You might die of boredom itself but for interesting diseases.

Another great reason to keep on track with death is, You are going to have enemies, just like the guidance counselor was to me. If they’re going to die, it needs to be something they don’t necessarily understand. I don’t know if the guidance counselor thought of me right before his death. That would've been wild: "Father, forgive me for treating that kid like crap so long ago. I didn't know I'd die from it.” But a consoling voice comes from Heaven: "Don't worry, my son, even if that's what it was, I had lots of other stuff to choose from, like your time in Las Vegas."
Posted by dbkundalini at 6:49 AM