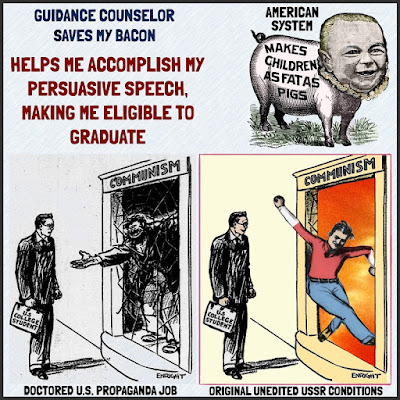 I know I wrung the guidance counselor many times through the wringer. And I’ll wring him out a little more today, with suspicions of ulterior motives, but for the most part this is positive about how he helped me accomplish my persuasive speech.

Have you ever given a persuasive speech? It’s very artificial in a class, since everyone knows it’s a persuasive speech. Of course they’re looking more for technique and less to be persuaded. Whereas, say I were to give my persuasive speech to a more typical crowd of indoctrinated Americans, it's likely they would’ve been repelled instead of persuaded. Almost persuaded, but lost, running dog lackies.

And who knows? I didn’t think it at the time, but maybe the guidance counselor only helped me because he thought it’d bomb and I’d look bad. As it turned out, no one was persuaded but I did OK for content and presentation. I even studied enough on Communism that for that week I was really into it.

We heard a lot about communism then, supposedly bad, blah blah blah. I thought, Give me a break. How can most of the world be Communist and Communism be bad? I was mostly thinking about China, which had people by the ton and manufactured most of the cheap things I bought. Seemed pretty capitalist to me...

OK, the guidance counselor was suddenly alive with helpfulness. I had no idea that he might be setting me up for a public hanging. But if indeed those were his evil motives, the kids in class were mostly bored and nothing I could’ve said would've yielded anything like a public hanging. Only one kid there was a radical — this was before Fox News — and I thought he had to be faking it. His hair he kept purposely short, his shirt was tucked in his pants by choice, his belt nipple-high, he carried a briefcase and identified with the word 'warmonger.' Even he didn't mind the speech.

I no longer have my notes and supporting documents except for what I have above. But you can tell what the tact was. To expose American propaganda about communism and show the actual truth that it's a good path for society. American propaganda tended to put a negative spin on communism, showing the people sad and in chains. Whereas the true teaching, communism’s testimony of itself, showed it as entirely good, the people happy, dogs breeding with each other like normal, etc. All hunky dory, the dog population proceeding apace, the people happy, dancing on the publicly held lawns, more or less a field day for everyone everyday!

I was immediately repulsed at American propaganda for not even admitting that the Communists saw things in color like us. But everything was a dingy scratchy black and white. Was that reasonable? I actually asked my dad, who was strictly anti-Communist, and he vouched for the black and white scratchy theory. I asked a guy at the Chinese restaurant, since I didn’t know any Russians not in hiding, and he said, “No talk 'bout, order pwease.” I had a crab rangoon and left, disappointed at not knowing more about worldwide governance.

One of the things that really rang true for me was some good information I got on American capitalists being pigs. That definitely rang true in my experience, letting me know I was on the right track. That went over very well in the speech. No one rebutted the point, nor did anyone produce compelling proof that we weren’t pigs. The graphic I had on American children being pigs was pleasantly received, many laughs.

The guidance counselor gave me a thumbs up on the thing and sent me forth. When I figured out his angle, that I might’ve been publicly strung up for my foreign viewpoints, I was of course disappointed. But it was par for the course for the guy, a capitalist bastard with a stupid wrestling coach mentality in a stereotypical guidance counselor’s body.

In the grand world of communism — and someday we'll see it at long last — we’ll string up guidance counselors like him. Or reeducate them, which no doubt will be a waste of time, meaning his hanging will be an hour or so later.
Posted by dbkundalini at 6:30 AM