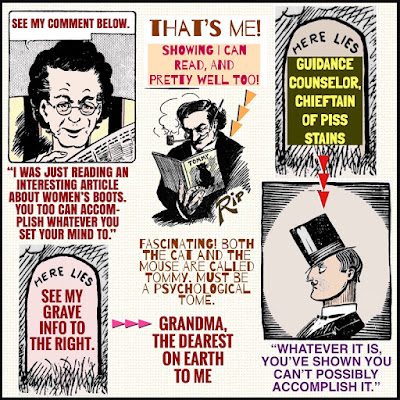 I’m looking at the picture one last time before launching into this and it makes me smile. This might be the best, most decisive evisceration ever of a guidance counselor. But if you have a better graphic evisceration, I’d be happy to set it side by side mentally and judge.

As graphic eviscerations go, it’s hard to say it’s better than he deserves, since in this one case the guidance counselor deserves only the best. It’d be a humbling thing to see the look on his face as he looked at it. I'd get a tingle in my legs. And I’m nice enough, remember, to have sympathy for him, so I'd probably not even show him. But if he had an ounce of humanity at this point, I hope he'd be a little humbled. Of course then he'd get a grip and shake off the humanity and swear it never happened! Or swear it would never happen again because he's now dead...

We ought to have an Evisceration-Off. All you need is the world’s bitterest grudge and a willingness to admit it, then put it in the most drastic terms you can think of. Notice how my guidance counselor never comes in for shades of gray. The ounce of humanity I gave him was a stretch. Because you can’t eviscerate in slow motion or by half measures. It’s not compassionate to the recipient of your grudge. Like skinning a rabbit, it has to be fast. And lest I look bad with that statement, remember, I didn’t start this fire. He was the one in charge, not me.

Anyway, we have here a truly compassionate person, Grandma, telling me that she was just reading an article about women’s boots, something perfectly wonderful, then assuring me that I can do whatever I set my mind to. Isn’t that just like her? The important news about what she was reading became a touching defense of her grandson’s ability to set his mind on things!

Then on the other hand, what have we here but His Unholy Eminence, the world’s most concrete evidence of the existence of a literal devil, the guidance counselor, doing his level worst to cut me down. I need to read his poisonous words again, which I’ve put in his mouth, to get the full impact of his evil: “Whatever it is, you’ve shown you can’t possibly accomplish it.” That's harsh! And might be even too drastic for him, but in putting it that way I’m consolidating numerous slights, interpreting rolled eyes, etc., so naturally it needs to be essentially the opposite of what saintly Grandma said.  She read an article about boots and encouraged me in the same breath. But he does the exact opposite.

Now look at me in the middle, torn between pure goodness and abject evil, not countermanding the guidance counselor or even thanking Grandma for her fashion sense and sense of my righteousness, but speaking from my own intellect on a book designed for children but still impressive enough to be called a psychological tome -- sort of like Dr. Seuss -- of a cat and mouse sharing the same name. Which could be applied to me and the guidance counselor. We’re either two individuals or the same mega-person in an inner titanic struggle — good vs. evil. Two souls in one body, like something from Star Trek, with the Enterprise in mortal danger for about 49 minutes.

I seriously like this graphic more than all the others! One, it gives me a remembrance of Grandma. Two, it takes my breath away to hear the guidance counselor’s verbal poison, and it makes me feel good about myself in the center, an overlooked scholar enchanted about a cat and mouse, while no doubt raising in my own core lessons about guidance counselors and how they go bad.
Posted by dbkundalini at 6:44 AM