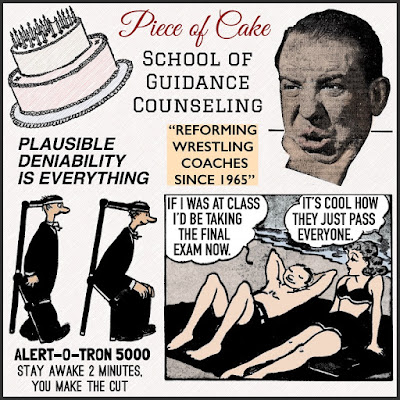 Here's a good mock-up (?) of a pretend (?) wrestling coach place, combining two of my themes, the education of guidance counselors and the reformation of wrestling coaches. I'm assuming it's pretend, but on closer examination this might be how they actually do it!

I'm going with my gut, I think it’s in good fun. So coaches, please don’t wrestle me to the mat and have your way with me. And if you do have your way with me, please let me see what you have first just in case I have a hard time later discerning your presence. Which might qualify you for advancement to guidance counseling, although don't read that as a guarantee.

The theme, you have to admit, is curious, however pathetic it also is. That the guidelines for wrestling coaches and guidance counselors are so lax at that particular institution! And I need to be careful. If there really is a place called “Piece of Cake School of Guidance Counseling,” let's call this another place, a fictional place, whose low standards matches my other posts on these actual occupations. That’s always danger egging these guys on, you don’t want to get in trouble.

Knowing what I know, though, it's still hard to picture their standards so lax that a guy on the beach could brag about his misbehavior and failure to be in school and that he'll be advanced anyway toward a degree and career. I’ve had a few lenient professors in my career, but none of them was quite that lenient. And not so much because they didn’t want to be cool, but because the price of it would be their reputation and profession. So everyone was respectable.

Even my guidance counselor was genuinely educated, I’m assuming. I actually never saw his degrees or transcripts, but I have a hard time believing no one else did. Now that he’s gone, passed on, it’s probably a moot point. But for all the faults I found with him, having the required degrees wasn’t among them.

"Reforming Wrestling Coaches Since 1965." That’s a pretty good record, depending on when the ad was made. If it was 1966, then they were just at it. If it was last week, that’s a long time not just to endure wrestling coaches but to reform them! That much reformation, if it were really happening, would have revolutionized the industry by now! Because one thing none of us wants — except maybe them — are wrestling coaches running amok and unreformed.

And the Alert-o-Tron 5000, while it sounds like a great invention, is probably someone’s idea of a gag. The very idea that someone could strap on an Alert-o-Tron and manage to stay awake for 2 minutes and get a degree sounds like a stretch. Heck, I could stay awake for 2 minutes, depending on what time of day it is, without an Alert-o-Tron, and I wouldn’t be a good wrestling coach. I don’t know anything about the various techniques, except the very basics: If you're pinned and exhausted, give up and pound the mat yourself. And as far as the well-known perks of the trade, I don’t swing with such lenience. I’m particular as to partners and follow some pretty stringent guidelines. Flowers, wine, a call the next day...
Posted by dbkundalini at 6:23 AM