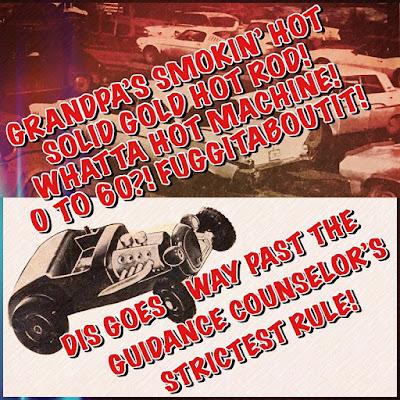 As my high school career was in its last few weeks, everything loosened up. Of course I was busy, with a big push to get papers and projects done and make sure I passed. They were strict on that point, leading to at least one all-nighter. I had to justify with documentary evidence in my Science paper that the earth not only has flat plains but mountains. But along with the fever pitch of all that, everything else loosened up. The guidance counselor, so often a burr under my saddle, even loosened up. Knowing his time with me had come and gone. He looked at things stoically, all things must pass. When I sat in his office, not going to wrestling, he still didn’t like it. But now it was nearly over so it wasn’t so bad.

For the students, the end of the school year is always a time to cut loose and even raise hell. And everyone expects it while not encouraging it. Take the guidance counselor. He was mum on it, but who knows what he did in the Korean War when it was time for him to come home! He might’ve stripped naked and run back and forth across the 38th parallel. I know that’s what I would’ve been doing if I were there, if I’d ever been drafted. Mooning the Communists, our enemy at the time, Kim Il Sung and the slave state in his thrall.

OK, loosening up. Behavior a little beyond the norm. Even veering off into the completely irresponsible and wacky. I was lucky to get away with it, but now I can crow it from the roofs What’s the big deal now that I was the one in Grandpa’s solid gold hot rod spinning brodies in the damned school parking lot? As long as I didn’t get caught, it’s my business and no one else’s. Even then, it’s not like anyone was really going to get hurt, as long as they stayed out of the way. Spinning in gravel's a magical experience. With the beauty of gravel being it’s very hard to trace the tracks to anyone in particular. And back then there were NO video cameras. If you could do it and get the hell out of sight, it was their best guess against your best denial. And I didn't know anything about it...

The guidance counselor might try to weasel information out of people about their pranks, but that late in the game his days were numbered. I got used to his disappointed glares but you still couldn't be too complacent. I believe he had some kind of arrangement with the administration to weasel information out of kids in exchange for rewards, maybe dates with the wrestling coach’s leftovers or rejects. But the key thing to handle that is simply to stay quiet, let several decades go by, then once they’re all good and dead, dead and gone, spill the beans, totally irrelevant today. Were the high school to come after me for old infractions, at this point I’d cuss them out and assume they couldn't legally rescind my diploma.

So I'm not too worried. This time life's on my side. The old foes are now a'molderin' in their graves, with bigger fish to fry.
Posted by dbkundalini at 6:32 AM