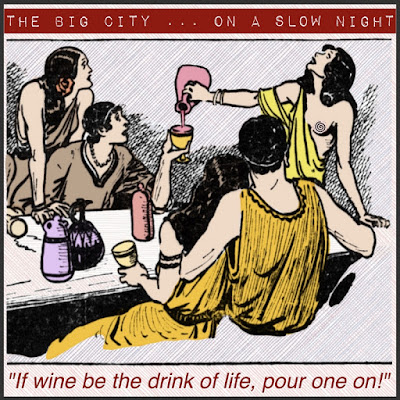 As the friendly narrator here, I know my place is always to be the voice of conventional morality and decry any slippage from the straight and narrow, basically defined as at least an average life of fair-play, respect for others, and personal and societal reserve. Yes, I can comment on murders but not condone it. I can fawn over newborns but not advocate for them to reject their parents and go rogue. And naturally I can feature hedonists at their parties, groping one another, sucking down the hootch, and getting so “friendly” with each other that they're buck naked, but … what the hell, why can't that be me! But at this point in my life, I'm sure I'd cover my frailty out of embarrassment.

Anyway, how do you even get in with a crowd like that? That’s always the question I have, on the off chance it came to anything. It comes down to this, basically, you need to be born there, or be there a long time, or just insinuate yourself as best as you can. For me, I was already born where I was, with particular people of some fixed morality, so I can’t go back and do much there. As for my lifespan, being so old, I could legitimately live another 20 years, probably, and learn to insinuate myself with some good old fashioned hedonists. But never forget, to insinuate yourself you have to be very bold. I can see you can ease into it by imitation -- looking to a friend with an in -- with the proviso that you might be evicted with the first bold move. Because it's not your natural turf.

Thinking it over a little more, I think I could have two sets of profligate friends. I meet the first set and learn the basics of their lifestyle, but do not insinuate myself. Then I take my findings to the second set, and without waiting to see what they do, merely launch into the behavior, sidling in, nonchalantly making myself at home, etc. First guy with his zipper down! The group might wonder about me but once they've assumed I'm friends with someone, my directness would yield good results. I'm swimming naked in the pool and I'm all hands!

My quick recommendation for others, if you have all the time in the world, look for a natural way of sidling up and becoming accepted. But if you’re old and could die at any minute, just get in there and let the chips fall where they may. Because, well ... there’s lots of reasons. The fullness of life isn’t for the meek. Life’s a banquet, a buffet, and buffets are free-for-alls. Everyone has a lifespan to worry about, but set it aside and make yourself at home. I’ve got two hands, baby, and they’re not doing anything! We’re back in ancient Rome and no one’s going to know! I’ve seen the history books and the authorities barely touch the average guy.

One other observation on the graphic. That’s the Big City “on a slow night”! Picture, then, the average night, or the night that blows the average out of the water, the other extreme. You’ll have stories for the ages, stories you dare not tell. Just don’t catch anything, that’s number one. And if you’re out of good names, name the little hellion after me.
Posted by dbkundalini at 6:00 AM