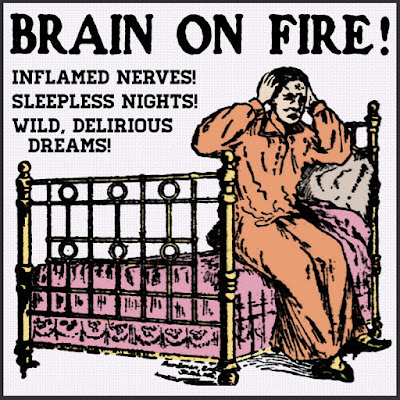 O! What I wouldn’t give for one decent night, my brain settled, nerves calm, adjusted, without rancor, instead of this persistent, nagging, uncomfortable, infernal inflammation! All the time with the nerves. They're like explosions, brain eruptions. Plus, not only have I wet the bed by tossing and turning, I've managed somehow to wet the pillow, the curtains, and towels in the drawer. What'd I ever do to deserve this? I'm also screaming, shrieking ... Where'd my precious life go with the sleepless nights? To sleep is nearly impossible, excluding my delirious daydreams through the day.

(I'm currently in the process of changing doctors, leaving our dear old family doctor for someone closer at hand in the Big City. I'm sure she's seen everything, but I'm still afraid I'll scare her off when I list my symptoms, the Big City driving me mad. But I'll try to soften the blow.


So I stand before you, my bitter cry giving real testimony to the indescribable absurdities and troubling realities of what the Big City can do to a person’s life, his possibilities and shattered nerves. I’ll hold my hand out. Look at it shake. I’m not “just doing that,” but my hands have a life of their own. And when I do sleep, I’m blubbering through the night, with whatever sleep so unsettled it feels like I'm awake. With tossing and turning, calling out to the saints to preserve us. I've bargained with the Powers That Be to take me, just give me one night of actual rest to redeem myself at long last from this horrible place.

O! What I wouldn’t give for one decent night, my brain settled and quiet, my nerves calm, adjusted, dependable, without rancor, instead of this inflammation. All the time with the inflammation! What'd I ever do to deserve this? Again, I say, I scream, I shriek, where'd my precious life go with the sleepless nights? I bet I haven’t slept in a year. To sleep is nearly impossible.

I stand before you, then, my bitter cry giving mute testimony to the indescribable absurdities and troubling (though unbelievable) realities of what the Big City can do to a person’s life, possibilities, and shattered nerves. I hold my hand out. Look at it shake! I’m not “just doing that,” the SOB at this point has a life of its own. And when I do sleep, they say I’ve been blubbering, with sleep so unsettled it’s like not sleeping at all; instead, I’m tossing and turning, calling out to the saints to preserve us, and I've been bargaining with the Powers That Be to take me, just give me one night’s sleep to fulfill a devil's deal.

I swear on Grandma’s heart that I've never had this level of difficulty back in the small town, where the biggest impediment to a good night’s sleep was the occasional squeakiness of the outhouse door. Just the slightest breeze might set it off, but just an ordinary brick from the foundation would prop it in the mud in such a way that it didn’t budge for years. That was reliability, a standard I had, and recommended to neighbors many times. I’d tell people how truthful I was like this: dependable as an outhouse brick in the mud, baby, an outhouse brick in the mud.
Now look at me, a full blown toilet just down the hall, shared with eight others who come and go at all hours of the night. Two or three old ones die off and two or three new ones sign the lease. What they died of, whether they deserved it or not -- and probably they did -- these are things no one speaks of. Who do you trust? As long as they’re not blaming me, I’m OK. I keep on living, don’t think they've missed that, and one of these nights it could be me, apparently shaving when I'm suddenly sliced ear to ear.

It’s tough to sleep no matter how you cut it. And then the furnace will die, and someone will have “borrowed” a blanket, and unknown friends will be illegally sleeping in the basement. And there's a crazy guy down there who can’t sleep so he’s beating the pipes, trying to jump start the heat; you can hear it three houses over. This Big City life is not real life in the truest sense of the word.
Posted by dbkundalini at 6:00 AM