Sometimes It Takes A Fish 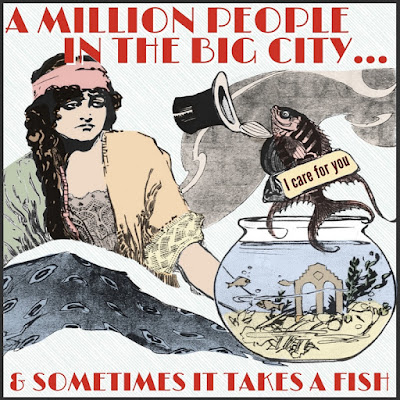 If you have a million people in the Big City, imagine how many fish there's gotta be. I've only have old statistics here -- the last official census of fish took place in 1950 -- but the numbers are undoubtedly close enough to at least get a rough idea. In 1950, though, it was established there were 4 million fish for every million people. Which sounds high, but think how that averages out, something like four fish for every person. I'm just gonna pause and take that in ..... Wow .... Plus, fish die fast but they breed like crazy, often times even eating their young, doing their best to keep overpopulation in check. It follows then, every time four fish die, one person goes too.

I myself was a big expert in fish many years ago when I worked at an aquarium store. Among my takeaways in this field, you should buy whatever life insurance is available because fish drop dead pretty much without warning. And eat their young, as just mentioned. But lots of things happen, something goes wrong with the heater, or there’s the least bit of bacteria, or if you turn the light on at night and interrupt their sleep, that alone can kill off half the colony. Anytime you have fish and the majority of them live to see tomorrow, you’ve succeeded. But don’t get too comfortable, because just because they lived to see tomorrow once doesn’t mean they’ll set any records by doing it again.

So, really, the only way to guarantee that you’ll have any fish at all, is to have ten times more than you want. At the aquarium store we had a supplier who I’m sure would give us a few dying fish just to maintain his business. Because it’s impossible to trace, these shysters will do anything, all with a completely innocent face. It’s definitely true, though, that you’re not going to send the bodies in for post-mortems, because the expense outweighs the profit. And it’s always your word against theirs. Making you stop and think, convincing yourself of the impossible, maybe I was a bad owner and that explains the massacre.

Anyway, fish are a pain in the ass, but they’re also good, and a comfort to dwellers in the Big City who may not have other friends. The Big City, of course, has no paucity of people, which is what makes it big. But in the nameless faceless crowds of people there aren’t that many close friends. They’re speeding by, usually with a bad muffler, making a nuisance of themselves. Why would you want them for a friend even if you could? My biggest obstacle to making new friends is the fear that they’ll eventually rob me blind. Whereas back in the small town, sure there’s criminals, but it’s only a fear, nothing to presume.

That leaves pets. Dogs, you have to go out in public so they can poop. Cats, there’s so many wild cats in the Big City, they’re sure to corrupt your own cats. I had a neighbor guy who was stupid when it came to cats, the cat had kittens, which pissed off his landlord (my friend wasn’t actually paying rent but living free as a kind of caretaker of the house to keep out criminals) who didn’t want cats peeing and pooping all over his place. Which happened when the kittens were unfortunately born: I lost my friend because he vanished one night.

What, though, if he would’ve had fish and not a cat? Obviously everything would’ve been different, a more positive outcome. Are you lonely in the Big City of a million other lonely people? Get a fish, it’ll keep you from being thrown out.
Posted by dbkundalini at 6:00 AM