I Buy Tires With Home Cookin' 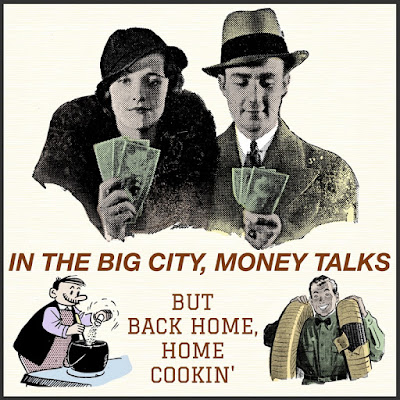 Now that I’ve seen both sides of the equation in this deal -- how it is in the small town and The Big City -- I can finally say with pretty good authority that the Big City, for all its bragging, hasn’t got anything over the small town. I'm able to see what’s good and what’s bad, and I’m telling everyone who’ll listen. And there's a lot of stubborn idiots out there. But no one can talk me out of it once I’ve made up my mind. Consider this a one-man stampede over the Big City!

Immediately when I start thinking of the baker, the butcher, and the new tire pusher back in the small town, I first think of the values I learned there. I think through all this stuff and you know how tears well up in your eyes? That’s what it is for me, except they're gushers. I get sentimental, then my whole life sweetens, then reality hits me squarely in the face -- the Big City I foolishly moved to -- and I go whole hog ballistic, with the terrible consequences of punishing myself. Crying and complaining that things aren’t what they used to be, to the point of denying myself supper and going to bed hungry.

I let my mind drift. The small town, gotta love it. It’s incredible now when I think back on it how much money I owe to so many people. And today I have the new tire guy in mind for some reason. Mostly for the many ways I deprived him of a good living by never having the exact change in paying for a tire. And he’d always shave a little off the price, giving me the comfort of riding on tires not bald or knobby while I only put out a few shekels.

I still have to think he was always glad to see me coming. Him with that small town grin you can't help but love in small town merchants. It conveys a lot, that he and I are friends, with there being no doubt that we go together -- merchant and customer -- and if anything threatens the fragile balance of that relationship everything could go to hell and we’d both be in a pickle, and not just us but the rest of the population that depends so much on keeping the system in place. Because, really, we might not survive through the day if we veered from it so much as a silly millimeter!

In the Big City, however, just to offer one stark contrast, it’s dog eat dog till the last dog’s dead, which is any minute now! How do they avoid the fragile balance of the small town? There’s always new population they've never heard of washing up on the Big City’s shores. Rubes like me from the small town as well as immigration from other Big Cities, mostly lowlife cheapskates who don’t pay their bills showing up to take advantage of the Big City largesse, more fraudulent in the long run but manageable in the short. Because everything they do depends on volume. If the tire dealer loses half his inventory to vandals, he makes it up on volume. But in the small town, a vandal takes one tire it takes the dealer a full nine years to make up the loss.

I needed a couple new tires just a few weeks ago. And, yes, I went to the Big City sharks, who wouldn’t look the other way and give me the tires as loaners for a six-month test drive. These despicable sharks wanted cash, or worse, credit. It knocked me for a loop and that night I fell asleep longing for the glories of the small town, where I might ride on free tires till they popped. Because in the small town a few promises and an occasional apple pie goes a long way. Gets me from place to place.
Posted by dbkundalini at 6:00 AM