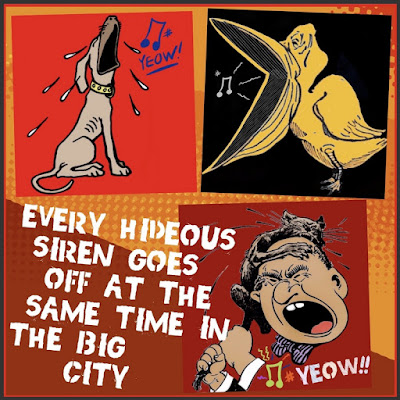 Wanna know how big the Big City is? This has to do with sirens. OK, say you’re at the south border of the Big City blowing a siren. That’s loud. But if you're a listener at the north border, you won't be able to hear it. That ruffles my feathers a bit, because everyone in town should know: "Help is on the way!

I come from a much smaller town and there was one huge siren everyone got to hear if there was the slightest problem: Tornado, nuclear attack, shady peddlers in town, discounts at the car wash. The tiniest town on earth, but one huge honking siren. But here in The Big City, they need a whole siren network, and of course they can blow all of them in many different places, because everyone's having an emergency at the same time. Maybe the airport’s on fire or the river’s out of its banks or peddlers are pushing cheap knockoffs, the sirens are much more localized.

Whether they’re localized very often like that is hard to say. Just sitting here with the typical layman’s ear, depending on what the traffic’s like in the neighborhood, I can focus and hear a siren somewhere, a virtually constant thing. There was the weirdest siren I've heard just today somewhere. It appeared that an ambulance was tuning their siren, or maybe clearing a dead duck out of the horn. It was kind of a whining quacking noise. I passed by kind of fast but the attendant definitely looked embarrassed.

I came back into the Big City on Christmas Eve this past year and was thinking, “The holiday, no one should be in an accident tonight.” Which held true for all my travels, until I was literally less than a mile from home. Sirens and particular roads blocked off because of maybe three vehicles that slid on the ice and went boom. Of course I was miffed, being that close. I had to detour around streets that I’m only half familiar with. Fortunately I’d seen most of them when I’d been lost previously, so there were only a few surprises. I played it instinctively, thinking things like, “This road can’t be an alley because it’s wider than an alley.” Then when I caught sight of definite things I always see, I let out a huge sigh of relief. 40 more feet of ice, about a third the size of a football field, and even with that, I could step on it too much and still end up dying. Thanks to these idiots who lost it on the ice; what’s the matter, don't you know how to drive?

Anyway, about the sirens. It’s quite remarkable how many are going off -- one just a minute ago, in fact -- and as often as they are. When I was in the small town before moving to A bigger town, every siren was a subject for discussion. In the bigger town, it was divided into 4, so you only heard every fourth siren. But in the Big City, if my ears can localize a dozen sirens just in my vicinity, you have to multiply that out by all the different vicinities and it’s shocking. There’s something like 1,300 sirens going off in the Big City every day! No wonder geese avoid the place. They're disoriented and end up in Honduras.
Posted by dbkundalini at 6:00 AM