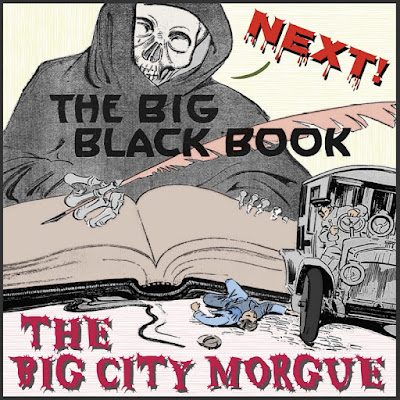 Can you imagine working at the Big City morgue? I can only imagine. You never run into anyone who works there, and never anyone who's been there, so obviously it's hush-hush. Meaning, unless I get a job there, if ever, I’ll can only imagine the craziness, the intrigue it must be. And probably if you tell anyone what it's all about, that's the end of you! You've gone from lab to slab just like that...

But common sense tells us that you’d have new arrivals all the time at the Big City morgue. With enough attendants to keep up with the constant flow, of course. The attendants will occasionally get a newbie attendant and they’re always amused to see the looks on his or her face when the fatalities start piling up around them. To the point, of course, occasionally, where they try to make it look worse than it is, just to keep the newbie on h/h toes. Like on Star Trek, “We can’t take much more of this!” They make it sound like the whole thing’s gonna blow and there'll be body parts strewn everywhere.

I have some idea of what harried Big City morgue employees must go through. Not based on ever having been at the morgue, but from my employment at a fast food pizza joint once and trying to keep up not only with pizzas coming out of the oven but delivering them. I was there a little over a week and it could’ve been the death of me. My funkiest delivery was to the city limits and a guy on a motorcycle waiting there. That went well enough, he had exact change. My most disappointing delivery -- and there were several -- was to a guy in the shower. “I told them to tell you I’d be in the shower and leave the pizza on the table.” Naturally they didn’t tell me any such thing, so how was I to know to walk in and put it on the table? That guy got a free pizza. I’ve tried that a few times myself over the years and the pizza place hasn’t been as understanding.

It would’ve been a good thing, really, if I'd gone into the morgue business, started out on the ground floor, learned about corpses, where to tickle them to see if they’re really dead, etc. By now, with my aptitude -- unmatched -- I could’ve owned a whole fleet off morgues and set up my own rules. A sign on the door, “I’m in the shower. If you’re here with a body, put it on the table.” Then I come out and see a dozen bodies stacked against the wall, strewn about on the sidewalk out front, etc., and think I need to call someone, but I’m the responsible party. Get out there and clean up the sidewalk before that stiff contaminates the whole earth! We only have one planet! (Of course, once they’ve been thoroughly processed with formaldehyed they’re kosher.)

But before you can own a chain of morgues you have to gain experience at the actual task. I actually might have enough experience. A great number of my own family have gone on to their reward. In fact, every single relative I’ve ever had that was born before the 1930s is dead, which ranges in the hundreds, thousands, and even millions. If I have that kind of experience going so far back, imagine what I could contribute today. Get that on my resume and I might take the Big City morgue system by storm. There's been so much death in my family there’s nothing about it I don’t know.
Posted by dbkundalini at 6:00 AM