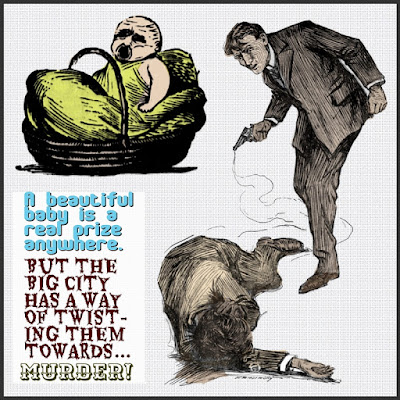 All the characters are gathered for this perennial drama. They may have come from far away, even the ends of the earth. Or they may have come from right around here, the Big City. I’ll be direct and say that is where came from, right here in the Big City, because unless they’re missing several key chromosomes, there's very few characters like them back in the small town. Thank goodness, but now here I sit in the Big City, and this is what I’m surrounded with!? Right now there's a siren outside, maybe arson, maybe murder, could be mail fraud for all I know.

When I see a newborn baby, there’s something about that that gets me all sentimental, with a kind of warm feeling leading to optimism. Of course I know I won’t be around to change the child’s diapers and tend to cuts and bruises and steer that precious one straight down the primrose path. But in most cases, just being generous, he or she will turn out exactly like me, an honored member of society, someone who contributes, whether it’s a dime here or there to a worthy cause or some great societal legacy like this blog. But of course that doesn’t always happen.

I hate to dig into the sociology of it too much because there’s often a lot of tragedy involved. The FBI’s Top Ten Wanted List, they all started out young, too, and now what? They’re animals, hunted down like the vicious SOBs they are. Even they had a childhood. And had they only been born gorillas, they might’ve turned out halfway sane. Swinging from tree to tree, peeling bananas, mating in the veldt, beating their chest and protecting their turf. Which you don’t really have to be a gorilla to do, but you can get in trouble if those trees are in someone else's yard.

The way life works, I’ll give you two images, the blender and the mixmaster. Sort of the same, but blenders get a household job done fast and mixmasters (roads) are inert, depending only on the motorist to figure out the key to it and the key to success. Mixmasters in the Big City can be extremely complicated. When you first see a bunch of them stacked up with no clear rhyme or reason, you pull your hair out. But if you lived there, you’d have it down in no time. Then there’s blenders, put the fruit in and three seconds later it’s yogurt. Quite the contrast.

So what’s the cause of going from a bundle of joy to a glowering murderer standing over his prey with the smoking gun declaring his guilt? It’s a three-pronged thing, with the Big City constituting a sort of super prong. Something in his head is askew, something in his environment is askew, and no one taught him never to point a gun at another person in anger unless you’re prepared to use it. Which I guess he was prepared, but still it’s a situation askew. This is when the average perp runs, which is the best thing he can do. His chances of not being caught are slim, but they’re not none.

But I think the real lesson for a successful life has to be, Don’t be born in the Big City.
Posted by dbkundalini at 6:00 AM