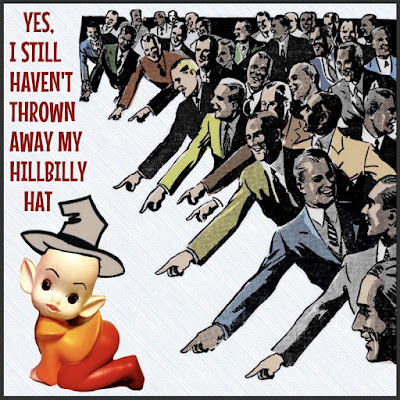 You have to know I hate the old attitude cosmopolitans have of making fun of a guy’s hillbilly hat and laying it on thick. In my world, that’s just plain rude. And if it weren’t me on the receiving end of their “fun,” but some other put-upon innocent guy, I’d be first in line to take them on and put them in their place.

First, there’s nothing wrong with a hillbilly hat. On simple practical grounds, it fits loosely, it covers a lot, and it’s quite comfortable. So I don’t know exactly what their point was. It might be that one of the idiots decided hats like that are behind the times and started the pointing and laughing. Then the others, who honestly didn’t see anything wrong with it thought they needed to jump in on the festivities so they wouldn't be teased. So none of them except the first guy really knew what they were laughing at but did it anyway out of some crazy immature group-think.

That conclusion completely minimizes their fun and puts me in the driver's seat. Although it's equally possible that all of them knew exactly what they were doing and knew it was wrong. So it's likely they did respect me but were unsure of the opinion they should show, which should have been just common sense good judgment, but they couldn't do the right thing because they weren't sure the others would go along with it. So that's it, these dweebs knew better, but with a roughhouse group dynamic like that it always seems good to jump on someone. Let’s say there’s just one or two of them who started the fun. The others have a problem to resolve: “How can the rest of us stand back and not get the joke?”

Or it could've been the joke was obvious and they were just looking for a little validation -- anything would do -- before erupting in one boisterous mass. It’s a clash of civilizations, and naturally they think their civilization -- the Big City -- is not just the dominant but the only valid one. Anything varying from their mode of dress and head covering, allowing for slowly shifting fashions over the years, is too quaint, too Hicksville to tolerate in this more enlightened present. So ... “Dog-pile on the Hillbilly!”

It’s really despicable, but unfortunately a thing I’ve seen over the years in various social settings. One year I showed up at the family Christmas celebration in gold psychedelic button bib overalls, and you’d’ve thought Liberace had come to town. With my own family! Who had one hell of a time razzing me, getting up in my grill, fingering my bibs, wondering where the candelabra was (!) and if that brand of newfangled overalls came with tails! That was the Christmas I ruined. Grandma gave one of my cousins some deodorant for Chrstmas, which I promptly took outside on that frigid night and pushed the button. It stuck open and fizzed and spun in the snow, giving him another year of smelling bad to endure.

As for my hillbilly hat, they had to think I was a sight, a regular troll under the bridge, with a fashion sense pretty stale for the Big City scene. I reject their mean-spirited attitude (in these understanding times!) and hope someday they get theirs. Curses on them, actual curses! May their homes burn to the ground, and may all their dates lead to various diseases for themselves and their partners. And may their stumbling parents fall and not be able to get up.
Posted by dbkundalini at 6:00 AM