I Reign A Small Town King 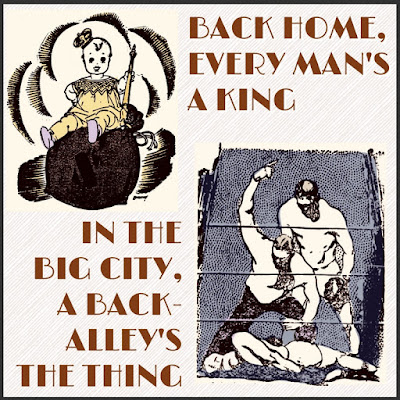 Even as a small town king myself, so often I find myself rejecting the prejudice small town morons have about the Big City, essentially that it’s evil. That goes against my competing small town values of prejudging any case. I had the impartial justice bug even as a kid, anytime I was accused of something. “Take your hands off me, you filthy devil,” I remember saying as a kid to one of my accusers, the school principal. That's what I should've said.

Another way to look at it is, Hey, we’re supposedly small town kings! If that’s what they call us, shouldn’t we embrace our royal identity and live out the truth how we have it over everyone else. It’s an injustice, it cries for legal help, to believe anything else. Although a lot of this language about us being small town kings was likely just a cheap shot by the main proponents of the small town vibe against the Big City. Meaning, yeah, sure, you’re a “small town king,” but apart from the debate with the Big City the message was always, “Don't embrace it as a thing,” or “When push comes to shove, we make the rules, we can change them.” A terrible thing as a kid to recognize. “You set up the parameters of my supposed royalty and you can knock ‘em down. 'We’re the ones calling you kings, We giveth, We taketh away.'"

Obviously in a situation like that, where the propaganda is widely touted even as you see how shabby it is -- like finding that all your birthday presents were just cardboard cutouts of the real thing, or your surroundings a Hollywood set when the director yells “Cut,” are things no kid wants to face. “But, but, you said!” “Yeah, kid,” the cynical adult says, “We know what we said. Stick around, clean your ears, there’s no telling how much more you’re going to hear about your so-called promise. You’re promise equals exactly this: The principal bares his ass and everyone lines up on their knees in lockstep to symbolically kiss it.  These are the insights the typical kid doesn’t know what to do with. Maybe just grow up to parade his own backside around the town, with one of two motives, to expose the apparently false teaching that every small town kid’s a king, or to keep embracing it, with the fear that to reject its truthfulness is to make even the promise vanish. Then what are you left with? Shambles, a small town vibe little better than the hated Big City.

I’d love to find the documentation on this stuff. It could be, given their low opinion of us, they were very careful to collate together all the documents, distributing them at meetings and then storing it all somewhere secure. But it could actually be easier to find than we think. A man serves as mayor or principal or even flunky only so long. I’ve seen how these meetings go, in unrelated fields. “We’re going to collect all the papers, etc.,” and the reality's often different. A guy’s talking and accidentally packs his papers home, they’re misplaced, they’re forgotten. Only to be discovered years later in an estate sale. “What have we here? A Nazi plan to make us think we’re all royalty, when, in fact, we’re peons from the word GO? This is what the exalted small town thinks of us, so desperate to keep us from the possibly true Big City propaganda that the Big City turns out the best kids, the true royalty!"

At the very least, friends, it’s disappointing to grow up and suspect your entire youth was a carefully nurtured lie, and now you're left to counsel a bunch of widowed children in their old age. But I simply got out, and here I sit, now a resident of the Big City. And I've seen one big difference here, they don’t even tell you you’re a king. The subject never comes up! Which explains a lot.
Posted by dbkundalini at 6:00 AM