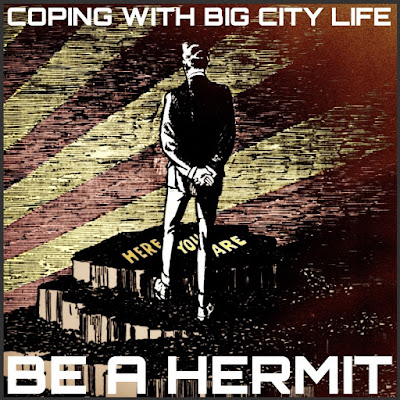 Going from the small town -- with all the great small town values, such as leaving our car jacked up all night and still having most of the tires in the morning -- to the Big City can be a daunting thing. Very challenging, and I don't like challenges. Make it the simple life for me, next to no effort.

I actually was practicing the simple life back home -- the problems with the house were so horrendous, I had little alternative but to ignore them -- then I heard it from both sides, the city and the county, that I needed to vacate the now-vacant lot that once was Grandma's. The house was shot and, believe it or not, so was I. A few family members said, “Come live with us,” etc., but I’ve never been one to live by half measures and so I said no. No doubt they were crossing their fingers behind the back that I wouldn't. So I left and chose a life guaranteed to be the complete opposite of everything I'd known, finding myself within days in The Big City.

Now it’s going on two years and I have a history to look back on, how I coped with it and what’s still to be done. A lot of guys in my situation, having grown up with a terrible fear of the Big City, would stay in and keep the doors locked tight. I actually do that now, except for taking the dog out and a few other chores. But right away I got out of the house and started coping with it.

It actually helped that money was tighter in those earliest days. Because I made a friend and got together with him and went scrounging for aluminum cans. Doing that, almost everyone I ran into assumed I was a Big City guy, since historically small town immigrants stay in and keep their doors locked. But there I was, digging through garbage cans, hiding sacks of cans in the woods for safe keeping, etc. Then when I had enough cans, of course, I walked or rode my bike to the salvage place.

By the time the year was finished and when the next summer began I was totally out of that and comfortable enough to keep a low profile. The friend had moved away, disappeared one night after his cat gave birth to kittens and pissed off the landlord. The second summer, if I saw a can somewhere, I just left it alone, on the off chance that maybe there was a new small town guy trying to get his footing, who might wonder where all the cans were if I picked 'em up.

One of the weird things about my senses in the Big City is I’ve had a terrible time remembering which direction is which. And it doesn't help if you're riding a bike. It’s easier in a car because you’re turning more often. So just fitting in was my project for the first year, and now getting down the directions has been my second year goal. In the last month I’ve been proud to realize that I’m getting the direction SOUTH down very well. Sometimes I still have to manually reorient myself on the other directions based on south but it’s all getting easier.

One of my weirdest moments in the first year -- another thing to cope with -- was I met a prostitute on a dead end road. Just me and her. I can’t remember what we talked about, but I wasn’t looking for a prostitute, not with my germophobia. It actually didn’t even occur to me that she was one. I just asked her nice questions because maybe she was in trouble. It looked like she'd been crying. Then she asked if I wanted “a date,” and I graciously said no and got the hell out of there.

Since then I've more or less been a hermit, going out when I need to -- the dog's bathroom breaks -- and I do go to the grocery store, then after that I eat a lot of leftovers.
Posted by dbkundalini at 6:00 AM