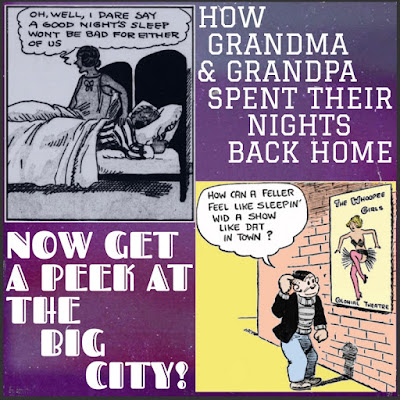 I’ve finally got something nice to say about the Big City. They do strippers like nobody’s business, whereas the last strippers I ever heard of in the small town came through when I was underage. A little more on that later.

Concerning the Big City, of course I'm shocked by nearly everything about it. The amount of land it consumes to house it. The great resources pumped into its daily life, seemingly commensurate with the immensity of its population. The nameless, faceless society it’s established for itself, which proves the adage that the more people there are, the harder it is -- even impossible -- to know everyone’s name. Although in some social settings even in the Big City I’ve noticed a few people do call me by name. Get deep enough into the flora and fauna of the Big City and you’ll notice a few debt collectors in every dark alley. Once you get an invitation to check in with them, they receive you graciously, call you by name and seem to know your history, Social Security numbers, etc. The downside about them is it always turns nasty.

So let’s hear it for the small town in this regard. Even the debt collectors back home sleep at night, and they’re happy enough if you give them an occasional fruit pie -- and this goes double if it’s one of Grandma’s recipes you’re exploiting -- to show you a few more days of grace.

The Big City has it over the small town in one regard, as I mentioned, strippers. The last time strippers came through the small town was the centennial, and they were shut down after the wrestling team (minors) held down the entire front row, and finally rushed the stage. But the downfall came when the wrestling coach’s picture was on page one of the newspaper, with lots of kiss marks all over his big stupid face. A friend of mine had a single small red hair that he kept in a jar by the door, a little token of lost love, or love gone astray, or promised love where it just fizzled out. We think it was from one of the dancers, or maybe a hair fell out of a guy's nose. Whichever, it certainly helps recall a night of passion and craziness.

So that's how it is, I’m in the Big City. And whenever I can afford admission, even if it’s a pie I baked for the nice ticket man, I’m picking up a few eyefuls of stripper magic. Ummm, I can see it now in my nicely erect mind’s eye, two of the loveliest (but wildest) performers to ever hit the big stage, Flora and Fauna, one left-handed and one right, but however you shake 'em out, they look the same on both sides. Each side a mirror image of the other. Bodies perfectly proportioned, the top looking as good as the bottom. And the right side equal to the left. Very nasty, perky, responsive, absolutely no shame.

It’s a great thing, and I urge you, if you’re ever in the Big City, this is the best thing we’ve got going --- purrrrrr --- by farrrrrr, all the way! Live a little.
Posted by dbkundalini at 6:00 AM